Fundraising gala BAZAAR Stars’ Charity Night 2021 accidentally “united” many former celebrity couples, leading to “oops” moments of embarrassment onstage! Seen at the same event were William Chan (陈伟霆), who dated Angelababy (楊穎) from 2005 to 2009 and Charlene Choi (蔡卓妍), who was with William from 2010 to 2015. 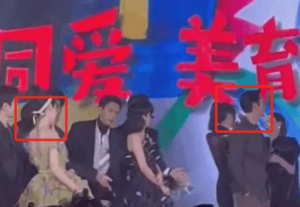 Likely oblivious to the inner turmoil of the celebrities, host Hua Shao (华少) and actor Li Xian (李现) did “gentlemanly” gesture of signaling for Angelababy to take the central position stage, which she was understandably reluctant to, given that William was standing right beside.

Ignoring the two’s well-intentioned request and standing rooted at where she was, the actress smiled with embarrassment and twirled around awkwardly at where she stood while holding up her pompous floral gown.

Luckily for her, actress Yang Mi (杨幂), who had earlier entered the scene with William, her co-star in Novoland: Pearl Eclipse <斛珠夫人>, resolved the tension by walking over to take the place. Meanwhile, netizens were already having a field day ‘attacking’ Li Xian online for his lack of knowledge about the web of relationships in entertainment, commenting “are you foolish or what?”

Another of William’s ex, Charlene also remained seated at the table throughout with other half of TWINS Cantopop group Gillian Choi (鍾欣潼), ‘conveniently’ avoiding any interactions with him.

A Meeting of Rumored Couples and Ex-es
Beside all the tensions, this year’s fundraising dinner was also lambasted by fans, who felt that the multi-colored lighting and gaudy décor could scarcely match up to the celebrities’ classy outfits. Yang Mi’s black gown was the most well-received by netizens, and even trended on widely searched rankings.

As everyone was busy positi0ning themselves on stage, netizens noticed how Vin Zhang (張彬彬) and Jing Tian (景甜) who created sparks onscreen in Rattan <司腾>, chose to chat happily with each other at a corner. Besides William-Angelababy-Charlene, another two rumored couples, Yang Yang (楊洋) and Victoria Song (宋茜) as well as Li Xian and Elaine Zhong (鍾楚曦) also chose to remain low-profile, and did not have much interactions throughout.