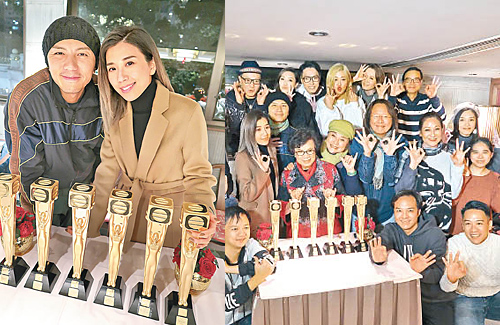 Benjamin thinks he has some split personality traits himself.

Adding that the show’s popularity with viewers was one of their best rewards last year, Ben and Mandy expressed hopes for a sequel. When asked if her target this year would be to clinch TVB Best Actress  which she lost out on in 2018, Mandy replied, “Everything starts again from zero in the new year; I can only focus on whatever’s in store.”

Jokes aside, Ben wishes to use his personal influence for good in 2019 to help the needy in society. Releasing a photo book last year, the photography enthusiast revealed possible plans for a photography exhibit.

Bringing up how he was secretly photographed by netizens who spotted him having a meal with girlfriend Bowie Cheung (張寶兒) and her family on New Year’s Day, Ben revealed that it was just a normal catch-up session, and wished it was not photographed secretly and highlighted in the press. Sharing that he had celebrated Christmas with Bowie while being busy in the past two weeks, Ben revealed his priorities for the new year,“Dating is only one thing, we should focus on other matters to achieve our life goals.”