The couple first met at a KTV lounge, and after much tribulations, finally reconcile at the end of season one. In season 2, Zoe (Natalie), an Accident & Emergency (A&E) doctor is four months pregnant with Tong Ming’s child, but decides to keep it a secret from him as she wants to give him a Christmas surprise. A rescue mission which she tags along with ends badly when she is accidentally impaled by a metal rod. Suffering major blood loss, Zoe is sent in time for an emergency operation which Tong Ming, a prominent cardiothoracic surgeon successfully leads, but a surgical abortion could not be prevented. 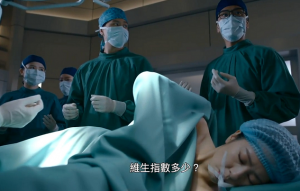 Leading Up to the Operation
Initially hearing the good news of the pregnancy via a voice recording from Zoe, Tong Ming is elated about becoming a dad soon, but his joy is short-lived as he immediately receives news that Zoe is up next on the emergency surgery list. Holding back tears, he decides for her to go ahead with the termination of the pregnancy so the lifesaving operation could proceed as planned. Asking to see Tong Ming before being put under anesthesia, Zoe is reassured by him that their child would be safe, but her later devastation upon awakening and learning she has lost her child leads the couple to break up yet again.

Fans Annoyed by Poorly Written Arc
Fans took badly to the romantic plot developments, describing Zoe as “loathsome” and pointing out that it was illogical for her character to continue taking on high-risk work such as hiking and saving an AIDS patient earlier if she was anxious about the pregnancy in the first place. They also highlighted how it was unlikely that doctors would ignore their own safety in the name of professionalism.

Netizens comments include “Why don’t the scriptwriter just sacrifice her, instead of (playing things up) using AIDS (and) impaling of a metal bar. It puts me off!” and telling Zoe to “just break up and give Tong Ming a break!” Describing the arc as “unreasonable” and Zoe’s character as “selfish”, they found it hard to accept that she chose to conceal the pregnancy from Tong Ming, and hurled brickbats at the scriptwriter for callous writing in order to play up the tragedy factor, and adding senseless details just to pave the way for upcoming romantic developments.

The viewer backlash even prompted series’ producer Marco Law (羅永賢) to personally address the feedback. He explained that Zoe did not blame Tong Ming for saving her and not the baby, but would be reminded about the pain of loss every time she saw him, which prompted her decision to break up and give both of them a cooling off period.