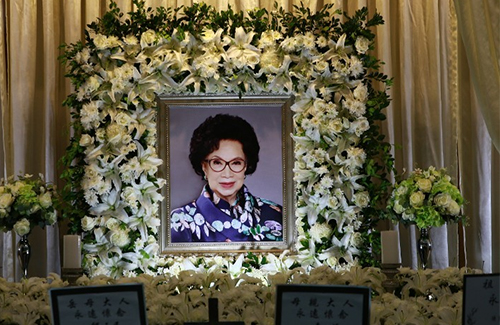 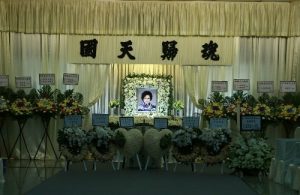 Mourners started arriving at the service—which was held at Universal Funeral Parlour—at around 3 p.m. this afternoon. Lily’s grandson Nicholas Yuen (阮浩棕) and his family were in charge of the service. Off-white was the main color theme at the funeral service. Above Lily’s portrait were the words “Returning to Heaven” (魂歸天國). Her portrait was framed with lily wreaths. Flower wreaths from her closest family members were presented at the front; her son and daughter’s wreaths were placed in the middle. Wreaths from her godson Hacken Lee (李克勤) and goddaughter Wong Yee-lin (王綺蓮) rounded the two ends. 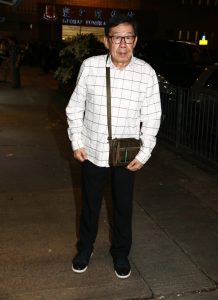 Veteran actor Bowie Wu (胡楓), a close friend of Lily’s, greeted the press with tears in his eyes. He described Lily’s passing as sad for many friends. “She’s always been very popular among people. She had set an example for all women. Aside from feeling sadness of her passing, I also feel a little guilt. Some years ago when we were shooting something together, we started singing “One Day When We Were Young” (by Richard Tauber) together. She had wanted to perform this song with me on television, but that never happened. Fortunately, on her birthday last year, we did sing it together. I guess there is a bit of comfort to that guilt. I hope she rests well in heaven.”

Bowie said Lily was one of the most polite people he has ever met. Every time he brings her back home, she would never forget to thank him wholeheartedly.