The following article contains spoilers for TVB’s Wonder Women, which ended on December 27, 2019.

TVB’s anniversary drama Wonder Women <多功能老婆> may have ended with a bang of surprises, but fan of the series may find comfort in knowing that the open ending may be the start of a sequel.

In the last episode which aired December 27th, Yan Chenggong (portrayed by Maggie Yu 宇淼) attempts to commit suicide after knowing that Jonathan’s (portrayed by Jonathan Wong 王梓軒) true love remains to be Joanna (portrayed by Alice Chan 陳煒). She jumps into the sea. Jonathan jumps in after her to save her, but his head gets smashed against the bottom of the boat. Yan survives, but loses a leg in the process. 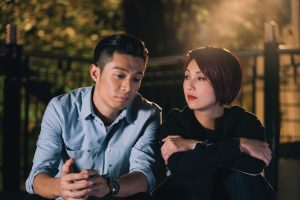 Jonathan passes away surrounded by family and loved ones. Joanna is devastated. She decides on leaving Hong Kong. Prior to her departure, Lam Fei (portrayed by Miriam Yeung 楊千嬅) reunites with her. The close friends had a falling out after it was discovered that Joanna had a one night stand with Lam Fez’s ex-husband Sheung Kim-hung (portrayed by Raymond Wong 黃浩然). Lam Fei tells Joanna that she forgives her, and the two friends make peace.

Meanwhile, Wing Ho-tin (portrayed by Pakho Chau 周柏豪) prepares to leave Hong Kong for med school, and leaves Lam Fei with an earring, telling her that they will meet again if fate allows it. Six years later, Lam Fei is a successful businesswoman and Ho-tin is back in Hong Kong having graduated from school. The two reunite, affirming their true feelings for each other.

After Jonathan’s death, his adoptive mother Mrs. Mui (portrayed by Lily Leung 梁舜燕) confesses that Jonathan was an abandoned child she had found in the streets. He only had one belonging with him, which was a letter indicating that he has a twin brother. In one of the final scenes, Mrs. Mui sees the shadow of a man that resembled Jonathan’s, but it turns out to be Ho-tin. This may be setting the steps for a sequel involving Jonathan’s past and alleged twin.