Despite 29-year-old Jeannie Chan’s (陳瀅) good looks and a nice figure, the goddess has been single since splitting with Arnaldo Ho (何猷亨) in 2016. However, good news might be in the works as she was caught having dinner with 32-year-old Carlos Chan (陳家樂) over the weekend and driving him to her place. Although Carlos has been rumored with Kathy Yuen (湯怡) after his three-year relationship with Jennifer Yu (余香凝) ended in June, it seems as if his real love is Jeannie.

A fan secretly filmed Jeannie and Carlos enjoying Japanese food at a restaurant and talking nonstop. Carlos was even filmed trying to feed Jeannie a piece of salmon but was rejected by her. When they left at 8 p.m., the two were more careful and kept a distance between them with Jeannie walking in the front. Carlos hopped into her car, and she drove them to her place of residence, and he was not seen leaving even when midnight rolled around.

It is rumored their relationship started developing after they began filming together for TVB’s new drama, ICAC investigators <廉政行動2019> in August. At the time, Carlos was asked at the series’ press conference if there were chances of him getting together with Jeannie. Having just publicly announced his split with Jennifer two months earlier, Carlos praised Jeannie as a very nice person and easy to talk to. During the event, they interacted a lot and seemed like close friends.

However, both parties denied the dating rumors. Jeannie said they grabbed dinner together since they got off work at the same time. She explained she gave him a lift afterward since Carlos didn’t drive his car, and they both needed to cross the water. The parking lot above her apartment has an MTR station, so she dropped him off there, parked her car, and went out again to meet her friends.

Carlos complained, “I won’t have any more friends if eating with me will cause misunderstandings! My friends sent me messages saying let’s not eat together anymore.”

He further clarified he didn’t feed her and blamed it on the angle. Meanwhile, Jeannie will not be afraid of dining with Carlos again. “I think it’s normal for partners to eat together,” the actress said. “We are still filming so I don’t think it’s necessary to avoid dining together. I eat with other castmates too – male and female! I eat with Matthew Ho <何廣沛> too, just that no one filmed us.”

Kathy, Carlos’ other rumored girlfriend, was also beside him when he addressed his rumors with Jeannie. Reporters asked if she felt better now that he is rumored with someone else. “Don’t say that,” Kathy said. “I do think it’s a little funny.”

Carlos expressed, “Last week was Kathy, but this week it’s Jeannie. They’re both people I’m working with. Jeannie is a loyal friend, like Michelle Wai (詩雅); we’re like brothers. We’re not dating. I don’t want to think about [whether or not we have a chance], I feel very scared all of a sudden.”

Jeannie acknowledged it’s easy for costars to have dating rumors especially when both parties are single. “I’ve experienced this a few times already,” she said. “But filming this drama is quite challenging because we both have other projects on hand at the same time, so it’s difficult for both of us. We both want to concentrate on our work and do it well.” 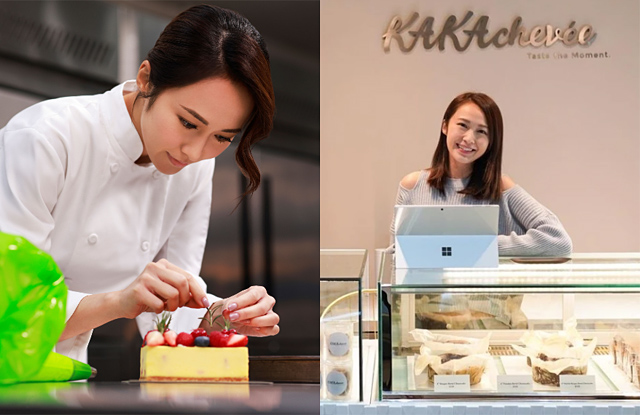