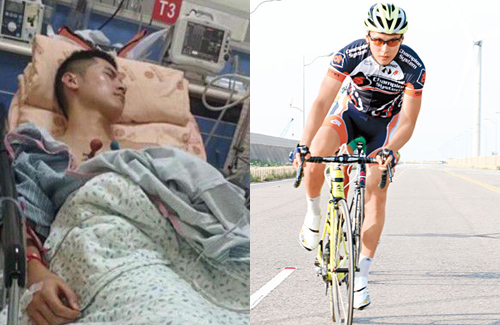 While filming a biking scene  for new movie To the Fore <破風>, EEG artiste Carlos Chan (陳家樂) got into a severe accident and broke his left collarbone. It was Carlos’ first day of filming the movie, which is shooting in Taichung, Taiwan. His co-stars were extremely saddened by the news and sent their blessings. It is estimated that Carlos will remain in the hospital for one week after his surgery, but may possess scars afterward.

Korean actor, Siwon Choi (崔始源), was present during the accident on the bike in front of Carlos. Mainland actor Shawn Dou (竇驍) shared that he saw Carlos fall to the ground from his bike, and an ambulance quickly rushed him to the hospital. Taiwanese artiste Eddie Peng (彭于晏) added Carlos was very hardworking during training, but there are always dangers associated with moving at high speeds.

Director Dante Lam (林超賢) revealed that the scene featured approximately two hundred bikers. “There were always less people during our training sessions, and many were representatives of a Taiwan cycling team. The average speed was 37 to 43 miles per hour. Carlos did an air flip and hurt his head and shoulders. He broke his left collarbone. Luckily, he wore a helmet and the riders behind him were able to brake on time.” Dante has no plans to replace Carlos’ role although it is estimated that he will not fully recover until 8 to 10 weeks later.

Carlos’ manager stated that they initially wanted to send Carlos back to Hong Kong for surgery, but the Taichung airport did not offer business class seats. Since it was inconvenient for Carlos to move around, they decided to stay at a local hospital.