Carlos Chan is a Romantic Costar 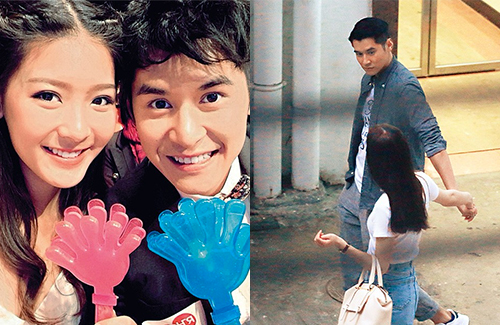 Daddy Cool <逆緣> has been doing great things to Carlos Chan’s (陳家樂) career. Though the 31-year-old EEG singer has been in the industry for 15 years, it really wasn’t until the broadcast of Daddy Cool that had brought him to the forefront of mainstream stardom.

A few days ago, Carlos was spotted holding hands with a girl who is not his girlfriend Jennifer Yu (余香凝), with whom he has been dating for four years. Carlos and the girl held hands tightly as they walked through a deserted street alleyway, talking amicably with each other. The pair turned a corner and stepped into a coffee shop, where they had afternoon tea. At one point, Carlos gently wiped off the crumbs on the girl’s lips.

No, Carlos was not cheating on Jennifer—he was actually on location filming his new web drama. Many fans were actually around the filming area, taking photos of the actor. Carlos and his costar showed a lot of chemistry during filming, and fans squealed at their interactions.

Carlos and Jennifer met on the set of RTHK’s 2014 television drama A Dream Comes True 2014 <總有出頭天>. The couple were extremely low profile, and by the time the media discovered them, they had already been together for over two years. In March 2017, Jennifer got involved in a serious car accident that damaged her facial bones. Carlos told the media at the time, “If anything happens to her, I am willing to take care of her forever.” Fortunately, Jennifer recovered quickly. When Jennifer was photographed wearing the ring that Carlos had given her, Carlos said, “That’s not an engagement ring, but a promise. Life is unpredictable, and I do hope to be able to take care of her forever. I hope we can get married within five years!”

2 comments to Carlos Chan is a Romantic Costar