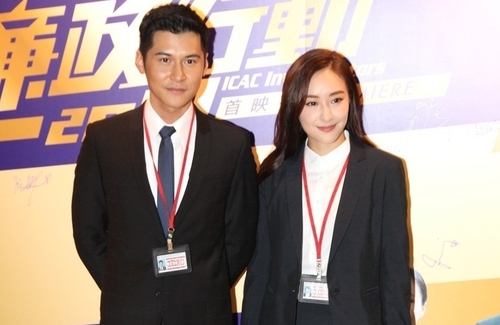 Artist Carlos Chan (陳家樂) appeared at the premiere of TV series ICAC Investigators 2019 alongside Jeannie Chan (陳瀅) yesterday to promote the drama. Their first time promoting together, reporters asked if Carlos was deliberately avoiding her beforehand. He denied it and expressed their schedules have not matched up.

He said, “She flew to Burma earlier, now it’s my turn to fly. I am going to fly to Mexico tonight to film Dante Lam’s (林超賢) movie. Originally, I was not able to come to the premiere today but the director let me take off an extra day. Dante’s the drama’s producer so he sent me as a representative.”

Speaking of his widespread rumor with Jeannie, he clarified they’re only partners and there is no romance between them in the drama. “Actually, we do not have love scenes in the first five episodes. The director wants us to give people the feeling that we will begin our romance in the next episode, but there’s only five episodes and ICAC is only filmed once every two years. If you film us again later, I should be at a very senior level because the drama series starts from when we graduated from the training academy and shows my experiences throughout the next ten years.”

As for the action scenes, Carlos said the movie does not have many, which realistically portrays an ICAC investigator. “People think that the ICAC is like the police and carry guns, but in fact, they don’t have guns. They can only apply for it and most of them work with the police. I asked my ICAC investigator friend and s/he highly recommended it.”