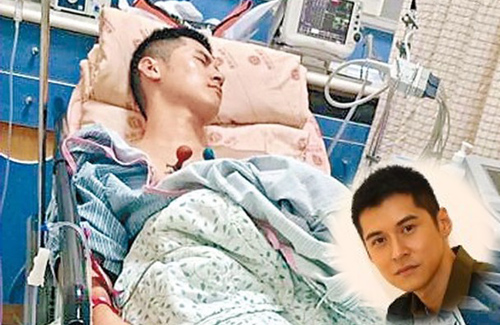 The filming of Carlos Chan‘s (陳家樂) movie, Getting Married <不日成婚>, was met with many obstacles. Initially, the project took a one-week break due to the pandemic. Not long after, Carlos took an unexpected emergency medical leave due to painful kidney stones. Despite his unusually high pain tolerance, even Carlos was unable to bear it and ended up going to the hospital.

“One night, my stomach was hurting terribly. I’ve always had stomach issues, so didn’t think it was anything serious. Not long after, I was urinating blood. The pain was so intense I couldn’t sleep, so I went to the emergency room in the early morning. The patients saw how much pain I was in and even let me cut them in line,” Carlos said.

After several tests, it was revealed that he had three kidney stones, with one falling into his ureter duct that was causing him such immense pain. “The doctor said I had a really good pain tolerance. If giving birth is rated at a pain level of 10, my pain was around a level 8 or 9! I was supposed to get surgery, but after a day of staying in the hospital, the pain went away. More tests and a subsequent medical report revealed that the kidney stone in the ureter has fallen into the bladder, which would eventually be passed.” The other two kidney stones remain in his body. Although the doctor advised Carlos to remove them surgically, Carlos is not in a hurry and wants to wait until the pandemic eases first.

On what caused the kidney stones, Carlos admitted that he often holds in his urine due to filming. “Sometimes, when we are filming out in open spaces, I would hold it for a really long time. This is a valuable lesson that taught me not to do that again! The funniest thing is that after being discharged from the hospital and returning to work, the director would often remind me to go use the bathroom. It made me feel like a little kid.”

On whether his family was worried, Carlos revealed that they did not know about the incident as he has already moved out. “I live on my own, so I did not tell them about it. I’m afraid they’ll be worried after seeing this interview.”

This naturally segued into questions about his alleged romance with Shiga Lin (連詩雅). Denying that he moved out to have greater privacy with Shiga, Carlos expressed, “I moved out because I did not want my ever-changing schedule to impact my family at home. Besides, my parent’s home only has one restroom, so we would often bicker over it. Right now, I am learning to cook for myself and would often try out different dishes.” When teased whether he has invited Shiga over for dinner, Carlos said, “No! My place is very small. I wouldn’t invite my friends over to cramp them inside.”

2 comments to Carlos Chan was Hospitalized for Kidney Stones