Although Carlos Chan (陳家樂) has been missing in action lately, viewers will soon get to catch him on the big screen. He’ll show new sides to himself in the romantic comedy, My Exceptional Boyfriend <我的筍盤男友>, and Dante Lam‘s (林超賢) action film The Rescue < 緊急救援>. Both upcoming movies are slated to premiere together in celebration of the new year.

Having been busy filming this year, Carlos excitedly expressed, “Knowing that these two films will be released at the same time certainly gives me a very strong adrenaline rush; it motivates me to continue working hard in this industry!”

In My Exceptional Boyfriend, Carlos strays from his usual happy and bright characters and instead plays a guy who’s domineering yet great boyfriend material. Carlos expressed it was a huge challenge to act out his character’s cool and hateful personality while making him likable in the viewers’ eyes.

Still, he was happy to have a great co-star, Gladys Li (李靖筠), who he praised is naturally talented with her skillful expressions. He also did not forget to mention his excitement to have worked with Eddie Peng (彭于晏) again on The Rescue and expressed that filming overseas in Mexico for more than three months felt like he was in a Hollywood-level production.

At the mention of director Dante’s willingness to promote and support Carlos, the actor humbly said that he didn’t go through the traditional training route in taking acting classes, so he hopes to participate in as many productions as possible to continue honing his acting skills.

Since many of his senior actors worked tough hours and conditions before they became international stars, he knows the importance of grasping all opportunities that come his way as a rookie actor. To further show his determination, Carlos pointed out that he already enrolled in acting courses to gain greater insights and push his performances to another level. 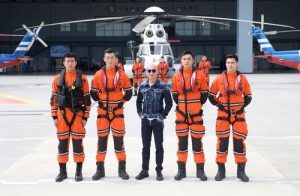