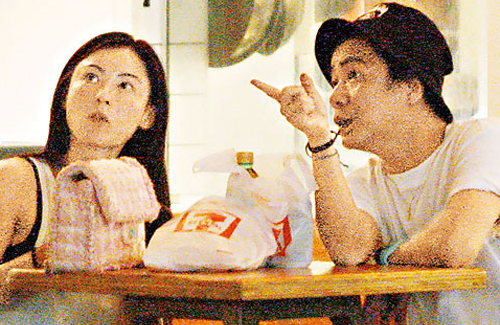 After ex-husband Nicholas Tse (謝霆鋒) reconciled his romance with Faye Wong (王菲), Cecilia Cheung (張栢芝) decided to move on with her life as well. She accepted Singaporean restaurateur, Martin, who has been pursuing her for six months. Although Martin treats Cecilia’s sons Lucas and Quintus very well, Lucas still misses his real father and does like Cecilia’s new boyfriend.

On October 11, 40-year-old Martin picked up Cecilia at Singapore’s Changi Airport after her flight from Hong Kong. After taking a break inside Cecilia’s $20 million HKD home, the couple drove Lucas and Quintus out for lunch at a Thai restaurant.

Throughout the meal, Martin served Cecilia and Quintus attentively with their favorite foods. However, the more rebellious 7-year-old Lucas ignored Martin and turned his back away, focusing on playing iPad games instead.

Martin and Cecilia were seen wearing the same matching watches, indicating their close relationship. After finishing their lunch, Martin put his hand familiarly on Cecilia’s back as they boarded his car.

Later that night at 7 p.m., Cecilia headed out again with Martin after settling her sons at home. They dined at Martin’s restaurant, Tong Ah (東亞), and chatted animatedly throughout the meal. Normally loving to smoke and drink alcohol, Cecilia stayed sober and only drank tea that night.

Several months ago, Cecilia met Martin at his restaurant, where she is a frequent customer. An insider spilled, “After Cecilia found out Martin goes to the same church, they had more things to talk about. At first, Cecilia treated Martin as a normal friend and agreed to meet together at church or for lunch.

“Cecilia has many pursuers over the last two years, but she was not interested in any of the men. She still had someone inside her heart. Last month when she realized it was impossible to get back together with Nicholas Tse, she decided to accept Martin. She felt that he is mature and takes care of her sons.”

Martin realized the key to Cecilia’s heart is to treat her sons Lucas and Quintus well. On his days off, Martin will take the boys out to theme parks and buy their favorite toys. Despite his efforts, Lucas has not come to accept this new “uncle”, whom Lucas feels has stolen his mommy away.