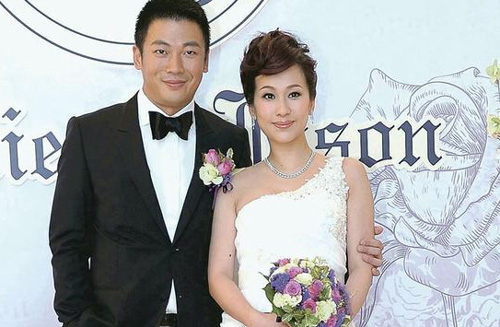 Hong Kong actress, Annie Man (文頌嫻) and businessman, Jason Lee (李梓慎), held their 28-table wedding banquet at the Four Seasons Hotel on March 2, 2012. Both 35 years old, the bride and groom had dated for 3 years. Appearing slightly more plump, the joyous bride announced that she was 3 months pregnant! The groom loved children, declaring that he hoped Annie will give him 5 kids!

Due to her petite frame and long wedding gown, Annie wore 5 inch high heels yesterday, thus taking extra caution due to her pregnant state. The bridal party presided carefully over Annie, who drank tea instead of wine during the toast. Passing her first trimester of pregnancy and finally able to announce that she was expecting, Annie happily stated, “I’m very excited to share my pregnancy news with everyone! This is the best wedding gift, sent from Heaven!” Her husband, Jason, loved children dearly and would not have married her if Annie did not similarly dote on kids! The newlyweds will be heading to Southeast Asia for their honeymoon.

Annie possessed many friends in the entertainment circle, in which her bridesmaids included Charmaine Sheh (佘詩曼) 、Angela Tong (湯盈盈)、Janet Chow (周家蔚), Margaret Chung (鍾麗淇) and Sherming Yiu (姚樂怡). The groomsmen included Chin Ka Lok ( 錢嘉樂) and Timmy Hung (洪天明).  Janet Chow and Timmy Hung enjoyed the lively wedding yesterday. The couple’s own wedding was only a few weeks away, as it was scheduled in the end of March.

Photographed vacationing in Singapore earlier, Angela Tong and Chin Ka Lok were accused by the media as taking their honeymoon. Despite earlier rumors that the couple were engaged and were planning a May 2012 wedding, Angela professed that Ka Lok had in fact not proposed yet. Angela explained that Chin Ka Lok was in Singapore for a work engagement, while she took the opportunity to enjoy the local attractions.

During the bridal games segment, Angela was the most fierce in playing tricks on Jason and the groomsmen. As reported by Oriental Daily, Jason said, “I’m very afraid of the bridesmaids, as they are not simple!” Annie joked, “When it is time for Angela to get married, we will seek revenge! We shouldn’t have to wait long. By the time I have my baby, Angela should be getting married!” Jayne: Congratulations to Annie Man! Looking forward to see her little one then! Loved how Annie’s one-strap gown matched her bridesmaids’ silver dresses.