Chen Xiao and Michelle Chen to Hold Wedding in July 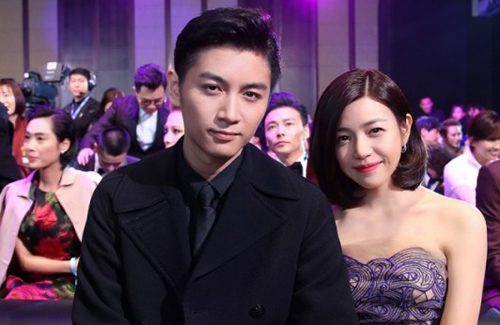 Less than a year after confirming their dating relationship, mainland Chinese actor Chen Xiao (陳曉) and Taiwanese actress Michelle Chen (陳妍希) will tie the knot this July, according to Taiwanese media. The couple plans to hold their wedding ceremony in Beijing on July 19 and conduct a separate banquet in Taipei on July 21.

Michelle, who turns 33 at the end of May, shot to fame after starring in the romance film, You Are the Apple of My Eye <那些年，我們一起追的女孩>, in 2011. She met Chen Xiao, who is four years her junior, when filming the 2014 wuxia drama, The Romance of the Condor Heroes <神鵰俠侶>.

Although Michelle received a great deal of criticism for taking on the leading role in The Condor Heroes, the drama led to a more positive result in her romantic life. In August 2015, she and Chen Xiao were seen visiting each other on set and spending the night in the same hotel room.

The day after the news broke out, Chen Xiao confirmed their relationship by posting a message on his Sina Weibo account. Specifically addressed to Michelle, the message read, “One day, you and I will share the same surname.” Chen Xiao also included a photograph of his hand, which made the shape of half of a heart.

In response, Michelle posted a photograph to her Weibo, in which she used her hand to form the other half of the heart.

In October 2015, just two months after going public with their relationship, Chen Xiao officially proposed to Michelle while the two were vacationing in Paris. The following November, he brought Michelle to his home in Hefei. Accordingly, Michelle brought him to Taiwan this past Lunar New Year, even posting a photograph of him with her family members on her Weibo.

Although the couple has never suppressed their romance after going public, neither did they confirm details about wedding dates. Last month, Chen Xiao replied, “Everything is in the planning stages” when he was asked about a potential wedding. Michelle added that she did want to get married this year but was busy with work.

Previously, rumors had surfaced stating that the couple would wed in July. This was because production companies were allegedly told that Chen Xiao’s filming schedule could only accommodate projects that would be completed before the end of June, as he would be preparing for the wedding in July. However, both Chen Xiao and Michelle’s representatives denied these rumors and asserted that the wedding would be held at the end of the year.

Nevertheless, Taiwanese news recently reported that the couple would indeed be getting married in July. The media also reported that many brand names would be fighting to endorse the event.