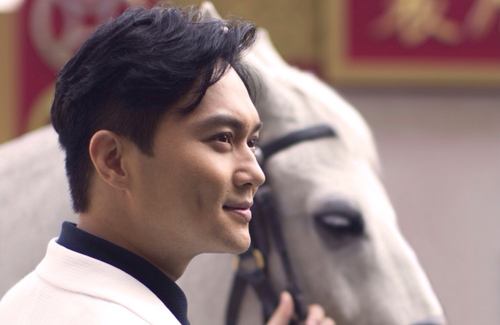 Many criticized Chilam Cheung (張智霖) for his ungracious acceptance speech at the 2013 TVB Anniversary Awards after losing the TV King award. The public blasted Chilam for being disrespectful to TVB and his fellow nominees, despite winning popularity awards for his performance in Triumph in the Skies 2  <衝上雲霄II>. Chilam did not take any of the criticism to heart, but did feel that his acceptance speech was “juicy” and faced the negative reports with a sense of humor.

Chilam Was Not Upset with Losing TV King

“An awards ceremony is a show, and the more dramatic it becomes, the higher the ratings,” Chilam explained. “That night was definitely very successful, and it even made me feel that my acceptance speech was very juicy. How many people out there would have the guts to ask if TVB disliked them? If I said it from my own mouth, whether or not I was really being sarcastic or genuinely upset, the audience would have the mind to come to their own conclusions. Let’s put it this way – I don’t think I’m not qualified to say it. Working for the same organization for over twenty years, I think I have that privilege.”

Contrary to the media’s claims, Chilam was actually very pleased with winning the My Favorite Male Character award. Portraying the flirty pilot Captain Cool in Triumph in the Skies 2, Chilam was one of the most popular and talked-about artists in 2013. “From what I can recall, they used to hand out ten awards for My Favorite Television Characters. Now, it’s down to one for each gender. For someone like me, who only comes back once every few years, any award is reassuring. Would you expect me to win everything? Winning this award is actually okay.”

Although he enjoys filming for television dramas, they do give him a different kind of stress. “The process feels like I’m walking on a tightrope the entire way. Filming Triumph in the Skies 2 wasn’t easy. I was testing the boundaries of the producers every single day. How much should we show the audience and how much can we show? Was this or that correct?”

Despite having over twenty years of acting experience, 42-year-old Chilam lamented that there are still many roles he has yet to tackle, including portraying a father onscreen. “I’ve literally been a father for many years. I should know how to portray one.”

Chilam’s son, Morton, is 7 years old. Chilam shared, “Mom is in charge of education. I am in charge of maintaining his sense of humor, which can lubricate many things in our lives. My son is like me. On vacations, we like to go to spas. He’s like a young master. When I see him, I see my younger self. To dote on him is like making up for my own childhood. I can’t see people yell at him, because it would feel like I’m being yelled at. It’s like I’m traveling back in time.”

Asked if he wants to have a daughter, Chilam said, “I love daughters, but I can’t have one myself. I don’t want to see her get hurt. I’ll rather have another son so we can talk about bikini girls. How can I talk about this stuff to my daughter?”

Chilam first debuted as an idol singer in 1991. His his first single “Modern Love Story” <現代愛情故事> with Maple Hui (許秋怡). was a huge success; both singers grabbed rookie of the year awards and the album itself was one of the best-selling records of 1991. In regards to Chilam’s successful music debut, he did not have much thought about it at the time. “When I was younger, I never really thought about planning head, except for hangout plans!”

Although consistently releasing new albums through the years, Chilam shifted his focus to acting in dramas, which was more profitable and allowed him to save up for a house. “Now, when I release a new album or a new song, it is strictly for promotion purposes. I produce for the sake of performing.”

Chilam and Antia Yuen’s (袁詠儀) first meeting was accidental. Both shooting their respective films in Beijing at the time, Anita’s first laid eyes on Chilam when he was taking a quick shower in an open lawn. Anita, already a Hong Kong Film Award Best Actress winner when their relationship first came to light, was often teased for dating someone “beneath” her. Twenty years later, the relationship has completely changed.

“To stay at home to take care of her husband and her son has always been [Anita’s] wish. The career spans of an actor and actress are different, and the golden times of their careers are not the same. Our current situation makes sense. And it’s not like she’s not working at all – she’ll be shooting a drama in the mainland next month – it’s just that she cannot leave home for very long. It is a beautiful change for her.”

Chilam laughed and said Anita is not as explosive as the media makes her. His intimate scenes with his female costars are definitely not on her list of worries.

“What’s the big deal? She doesn’t care. For example, that scene of Fala Chen (陳法拉) and I kissing in the castle in [Triumph in the Skies 2]; on the day of filming in Europe I called her and said I would be filming something awesome, but on the night of the scene’s broadcast, her only reaction was, ‘That’s it?’ She was not jealous at all. Only the media likes to make her seem like she’s a lioness.”

Having been together for twenty years together, Anita and Chilam are still as close as best friends, and Anita openly praises Chilam’s handsome looks. “It’s like she’s absolutely obsessed with me, isn’t it? Don’t I have such a good wife? Actually, we don’t really have a specific way on how to communicate. Everything comes naturally. Maybe it’s because she had put me under house arrest, or maybe she’s pressuring me with her power. I can’t explain it.”

Compliments aside, Anita also has a habit of complaining about being a single parent raising “two boys”. Chilam admits he is a kid in an adult man’s body. “If you’re a man who is very mature and wise, you may also have a lot of negative thoughts built up. You would always be sighing. It’s good to be happier, and it’s good for an artist to maintain that innocent youth. At least when you film comedies, you will know why they’re funny. You wouldn’t need to fake it. That’s my personality. If you like it, you’ll like it.”

Source:  U Magazine via kuangaitvb.com