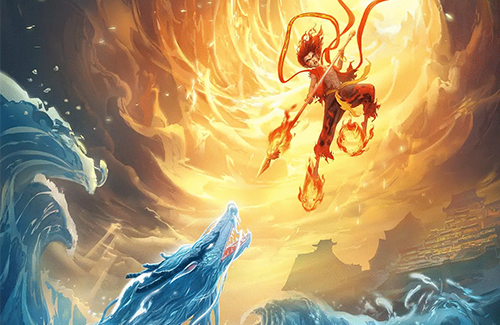 The summer season’s biggest cinematic hit wasn’t blockbusters like Shanghai Fortress <上海堡垒> or The Bravest <烈火英雄>, but an animated film, directed by a relatively unknown director and featuring the voices of relatively unknown actors.

Ne Zha <哪吒之魔童降世>, directed by rookie director Jiaozi (饺子), is about the Chinese folk deity Nezha, one of the main characters in the Ming dynasty novel Investiture of the Gods <封神演義>. The 3D animation was released on July 26th to overwhelmingly positive support, breaking numerous box office records and easily overtaking other blockbusters this summer. Ne Zha grossed 3.3 billion yuan after only 16 days of release and is projected to gross 4.75 billion by the end of its theatrical run, overtaking Avengers: Endgame as the third highest-grossing film of China.

It was welcomed with a downpour of critical and commercial success, almost unprecedented for a film that did not have a lot of mainstream backup support.

But the box office miracle of Ne Zha also tells us a few things about the Chinese film industry: that it is still growing and ever-changing. Playing safe by following trends simply don’t cut it anymore. Ne Zha won the box office, not because the action was really good nor because the animation was ground breaking—it won because it was original.

In fact, many of China’s past box office successes were also miracles of their time, such as Wolf Warrior <战狼> and The Wandering Earth <流浪地球>.

Ne Zha’s miracle success also tells us that the Chinese film industry is slowly shifting towards a new generation—selling nostalgia or seeing the same actors and directors headlining a film aren’t what the Chinese moviegoers want to see anymore. Many of the highest-grossing directors in recent years are newcoming directors. New directors are more daring, more passionate, and more aggressive when it comes to creating original content. They have no baggage to carry and are more willing to take risks.

Many Chinese moviegoers also see this, and are more willing to support a new director with original ideas than “safe” blockbusters that many moviegoers have seen times and times before.

Chinese animated films have always been a hit or miss in China, and while Ne Zha isn’t flawless, the main character’s strong belief of controlling his own destiny resonates with many young Chinese people today, and the relatability factor of the film—despite it being a fantasy—earned a lot of brownie points.

It’ll be hard for future animations to emulate the success of Ne Zha, but what Ne Zha did provide is a start of what may come in the future, if only the Chinese film industry would stop relying on “miracles” to push through.