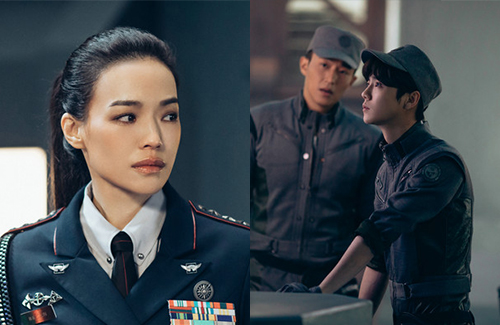 China is looking to establish new heights in the sci-fi drama with the upcoming Shanghai Fortress <上海堡垒>, a film set in the near future about how an intelligent race of alien species invade Earth to harvest a hidden energy source.

Set in the near future of 2035, the city of Shanghai gear up upon the invasion of an alien species that is bent on taking over Earth in order to harvest an energy power source that is hidden in the planet. Shanghai Fortress is described as a “sci-fi war film” with “soldiers of the future” fighting to preserve and protect mankind.

The film, promoted as China’s first sci-fi war film, is directed by Teng Huatao (滕华涛). It stars Shu Qi (舒淇), Lu Han (鹿晗), and Godfrey Gao (高以翔). Aside from visual effects, moviegoers can also expect many practical effects and action sequences spanning gun wars and aerial fights. Actors underwent half a month of stunt training prior to filming. The actors were given lessons how to properly use each prop so they could familiarize themselves in their own roles.

“It’s going to be exciting,” said Director Teng. “Add in the visual effects made in post-production with the fantasy elements of the story and I’m sure viewers will love it.”