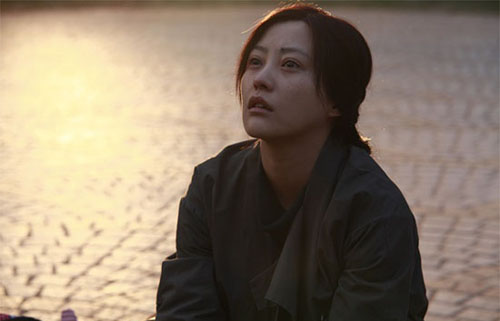 The critically acclaimed Mystery <浮城谜事>, which was nominated for seven Golden Horse Awards, will be released in theaters on October 19. The suspenseful thriller revolves around the enigmatic death of a young woman and touches on the sensitive subject of corruption in law enforcement agencies in mainland China. In a city showered by pouring rain, a crime is committed, which leads to a secretive love story, and eventually unfolds into a conspiracy. It begins with the murder of a young girl (played by Chang Fangyuan 常方源), who is followed by a stranger, attacked and finally killed when a car driven by a man from a wealthy family runs into her. Under pressure from the wealthy family, the entire incident is handled privately under the table. However, police officer, Qin Feng (Zhu Yawen 朱亞文) and the mysterious Tong Mingsong (Feng Zu 祖峰）discover some minute evidence at the crime scene, and notice something fishy about the case.

Lu Jie (Lei Hao 郝蕾）and Qiao Yongzhao（Hao Qin 秦昊 ) are a lovely couple, and have a happy family and a daughter. As owners of a company, they live with no worries. While accompanying her daughter to a playgroup in school, Jie befriends her daughter’s friend’s mother, Shen Qi (Qi Xi 齊溪 ), and through their friendship she discovers her husband’s affair. During her investigation, Jie discovers nothing is coincidental, and that her husband and Qi had more than just a relationship. Impacted by the sudden change in her family, seeing how gray her world has become, Jie starts to plot a scheme….

The plot thickens when Feng and Mingsong decide Jie is the main suspect.  The death of the girl could be related to the husband, wife, lover, police, or even the rich family. Who is the real murderer? Also trapped under the shroud of mystery is the love triangle of the husband, the wife, and the lover. The wife’s final words are, “There is no Shen Qi; it’s her turn now.” This brilliantly turns the entire plot into an unsolvable case.

The rain-drenched city is under one giant conspiracy. Perhaps director Lou Ye (婁燁) put it best, “This is an accident, but it is due to fate. This is a love story, yet it is intertwined with conspiracy. This is a murder with no murderer. One cannot escape a relationship; it’s just part of life.”

9 comments to Critically Acclaimed Thriller, “Mystery” in Theaters on October 19