As stars of the currently airing Chinese historical romance The Long Ballad <长歌行>, Dilraba Dilmurat (迪丽热巴) and Leo Wu Lei (吴磊) have been trending for their interactions onscreen and offscreen during behind the scenes. In a recent interview, the 28-year-old actress shared her thoughts on working with Wu Lei, who is seven years younger than her.

Before the series was released, there were already heavy discussions on the romantic pairing of Dilraba and Wu Lei. Many worried there would be an obvious sense of age difference between them and expressed their reservations. Prior to filming, Diliraba also shared similar concerns while feeling a little upset. “I’m still young and I’m also in my 20s!” she exclaimed. 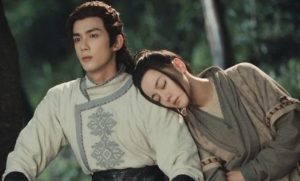 Fortunately, all of Dilraba’s worries dissipated when she arrived on set and found that Wu Lei’s performance was very mature. Especially bulking up to look more convincing as a warrior,  the way Wu Lei carries himself confidently on screen shows a greater maturity than most actors his age.

Diliraba further shared that she really likes her character, Li Changge. While she was previously anxious on whether she is suitable in portraying the role when reading the manhua, her heart settled upon receiving the script and analyzing her character further.

The actress described that Changge is a very tough and dignified girl who is not afraid of getting in trouble despite being a princess. A brilliant military strategist, she learns from others and strives to walk on the right path. Diliraba feels particularly sentimental and confident to play the role well as there are multiple dimensions and emotional layers in the character development.

While the drama has only streamed 30 out of the 50 episodes, Diliraba’s effort is already recognized by viewers who find her performance greatly detailed and her crying scenes to be “well-layered and immersive.”