Donnie Yen Abandons Kung Fu and Turns on Passion in “Together” 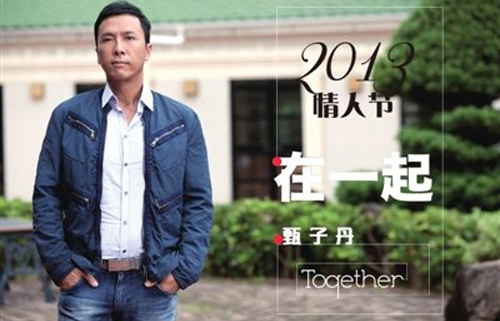 Produced by Joy Media, Together will be comprised of three stories. One of the stories features Donnie Yen and Michelle Chen as an odd couple. Donnie plays a traffic cop, “Mr. Cool” who never smiles due to a rare disease. During an operation, Donnie meets Michelle, a patient with amnesia, and spends most of her time looking for her deceased fiancé. Donnie and Michelle fall in love eventually, but one day, Michelle goes through another episode of amnesia and completely forgets Mr. Cool…

Donnie Yen’s success in the industry was due to his martial arts ability. His movies demonstrate beautifully choreographed fight scenes with his cool and calm expressions. Fans jokingly call him “poker face”, or say he has a “paralyzed-face acting style”. No wonder many fans were surprised that in the movie, Donnie not only dropped all of his trademark martial arts, but chose to show his emotional and romantic side.

Looking past his tough guy image, Donnie is also known through out the industry for his romantic side. He knows how to take care of his woman. For many years, Donnie has been faithful to his wife, Cecilia Wang (汪詩詩). Even Shu Qi (舒淇) commented how nice it would be nice if she can be Donnie’s wife. Shu Qi remarked that the way Donnie looks at his wife shows his gentle side. The couple’s earlier Phuket getaway made the public aware of Donnie’s romantic side.

“I am getting old now, sometimes it is tough to fight,” Donnie commented that he would like to explore other roles rather than being an action hero.

Angelababy in Love Triangle with Kai Ko and Bosco Wong After Tai Chi Zero <太極>, which was released in theaters in September, Angelababy returns to the romantic comedy genre. Labeled as a goddess without any flaws, Angelababy, completely sheds her innocence and portrays a girl with a wild and crazy love life in the film, challenging the traditional idea of love and romance.

Angelababy will be caught in a love triangle involving Kai Ko and Bosco Wong. Intelligence Police officer, Kai Ko, and the superstitious Angelabay fall in love when they meet each other in a speed dating event. Kai Ko later finds out that the reason why Angelababy is in love with him is because she foresaw that she will marry someone with the name of “Lin Huan,” or the name Kai Ko borrowed from his buddy (played by Bosco Wong). Kai Ko now has to find a way to convince Angelababy it is him she loves, and not Lin Huan.

Taiwanese film, You are the Apple of My Eye <那些年我們一起追的女孩>, was a phenomenal success throughout Asian box offices last year. The film catapulted Kai Ko and Michelle Chen to stardom. Kai Ko won the Golden Horse Best New Performer award, and Michelle became the “goddess of the masses” due to her refreshing look and feel. The two are reunited in Together, performing similar roles of young people deeply in love. Apart from their personalities that fit their roles perfectly, most fans would love to see a repeat performance of the love they portrayed.

TAGS: Angelababy, Bosco Wong, Donnie Yen, Kai Ko, Michelle Chen, Together, You Are the Apple of My Eye