Currently filming for John Wick 4, the cast and crew including action star of Ip Man <葉問> fame Donnie Yen (甄子丹) and Hollywood actor Keanu Reeves have arrived in France from Germany. Elated to be greeted by fans, it seemed that the city has also welcomed Donnie with open arms, with cultural jewel Palais Garnier opening up its historic premises for filming for the first time, albeit at a charge of HKD$4 million location fees for two days!

It’s a Green Light for Donnie 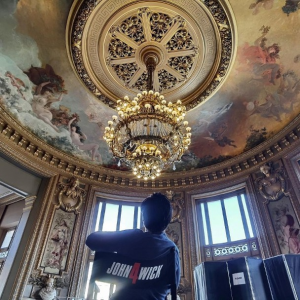 Announcing commencement of filming for the action sequel in June, director Chad Stahelski also got martial arts star Donnie Yen to join the cast as super assassin Keanu’s old buddy, uniting in the fight against their common foes. As a cultural and architectural symbol of Paris, this is the first time the 160-year-old Palais Garnier is opening up its historic grounds for filming, its decision prompted in part to express support for the film industry. Authorities have also closed off part of the streets at the area to facilitate filming.

Checking in at the monumental site, Donnie posted on social media a shot of himself sitting on a studio chair labeled “John Wick 4” and admiring the splendid interiors. “It gives me great joy envisioning the possibility of creating a character both entertaining and special, that’s inspirational.” he wrote. 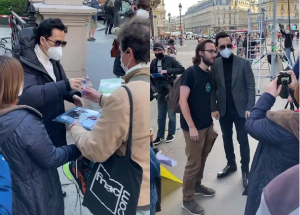 Besides huge camera cranes and jibs readied for filming, the site was thronged by enthusiastic crowds who wanted a glimpse of the stars. Wrapping up the day’s filming, Donnie was stopped by fans asking for autographs and selfies, and some amongst them held movie memorabilia from the Ip Man franchise as well as his earlier works, such as 2007’s Flash Point <導火線>.

Unable to let on more of the franchise’s details due to the confidentiality agreement he signed, Donnie shared, “I have never been to Palais Garnier, this is my first time there and it was truly eye-opening, another surprise was seeing so many fans [and] I was overjoyed.” Adding that filming will wrap around November, he hopes to spend some much-needed time with the family and take a short break before busying himself with other work plans.