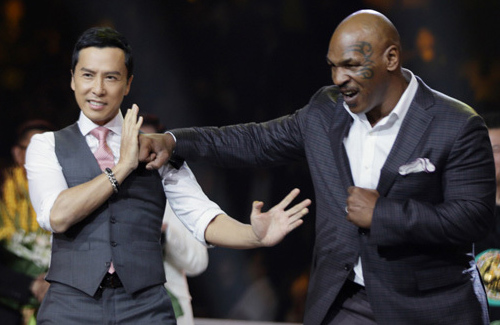 When appearing at a promotional event in Beijing, Donnie Yen (甄子丹) spoke up about the highly anticipated action film, Ip Man 3 <葉問3>, the final movie in the Ip Man film series. He promised fans that Ip Man 3, which he is currently filming in Shanghai, would be even better than the first two installments.

Ip Man 3 will mainly focus on two storylines: Ip Man’s friendship with martial artist Bruce Lee (李小龍), considered his most famous disciple, and Ip Man’s rivalry with an American boxer, who is portrayed by heavyweight boxing world champion Mike Tyson. At the event, Donnie praised Tyson, whom he considers one of his idols, for being very nice, despite his intimidating outer appearance.

Donnie also talked about the current difficulty in filming action flicks. “These days, you really have to go for broke when filming a quality action movie,” he mused. “I’m not saying don’t pay attention to safety, but I feel the highest level of art requires a spirit of taking risks. Not to mention, the standard for filmmaking is now getting higher and higher.”

When asked which of his films has been the most difficult, Donnie replied that every single one is challenging because he puts an all-out effort into each one. “I hope to improve in every single one of my movies,” he said. “Although I may not achieve that, the filming process for each one has been unforgettable.”

Donnie also recognized that, despite the hardships that come with his job, he is extraordinarily lucky to be able to share his thoughts with other people and positively influence them through movies. “I hope that in the time I have on this earth, I can film even more things with a positive energy,” he said.

After filming for Ip Man 3 wraps up, Donnie plans to take a summer break in order to spend more time with his children. Following that, he will be back to work on another movie.