MIRROR’s Edan Lui (呂爵安) is having a successful year so far, growing his career in the music, movie, and television industries. Recently, he has been furiously working out in preparation for his role in upcoming ViuTV drama i.SWIM.

This week, the cast filmed at The Whampoa mall, and attracted many of Edan’s fans and locals to watch. When it was time to switch settings, the crew arranged for a car to drive Edan even though it was one minute away, as they did not want to cause chaos. Edan’s co-star Jeffrey Ngai (魏浚笙) and the rest of the crew happily chatted as they walked instead.

In the drama, Edan and Jeffrey are teammates on the swim team. Sofiee Ng (吳海昕) will play their teacher. In one scene, Jeffrey walks in on Edan and Sofiee in a restaurant and angrily rushes out. Seeing this, Edan runs after him and leaves Sofiee behind. Afterwards, Edan and Jeffrey get into a physical altercation in public.

As the crew kept tight wraps on the details of the drama, no spoilers of the romantic relationships have been leaked, so it is not clear whether the leads will be in a love triangle.

Since filming started, Edan has been suffering from extreme lack of sleep but he remains professional on set. When there is a break, he would pick up his script and practice with Jeffrey, rather than playing on his phone or napping.

As their last collaboration was be ON Game <戰膠>, Edan and Jeffrey have become quite close. At a recent function, they played up the fanservice for their fans so it is understandable they also get along well on the set of i.SWIM and would spend their breaks together, even going to the washroom together!

However, Sofiee did not seem as tightknit with the cast and seemed left out. 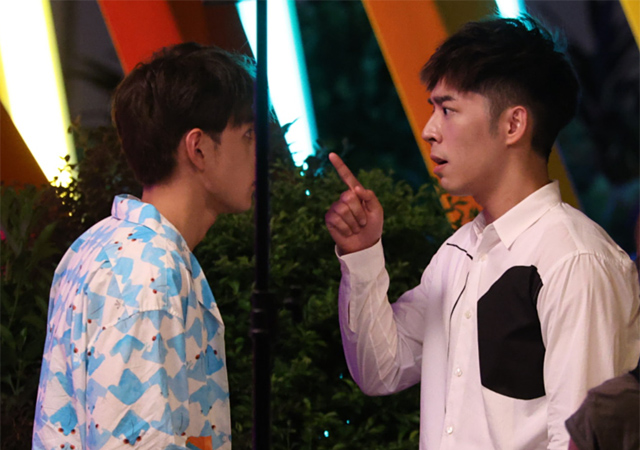