With Ekin Cheng‘s (鄭伊健) upcoming Hong Kong concert in February, he has been inviting many friends for interviews to help with the promotion. Previously, he invited his old co-star Charlene Choi (蔡卓妍) to share funny anecdotes from their time filming My Sassy Husband <我老婆唔夠秤>. This time, he invited Gigi Lai (黎姿) to talk about their collaboration on the Young and Dangerous <古惑仔> movies.

The Young and Dangerous franchise starring Ekin Cheng, Gigi Lai, Jordan Chan (陳小春), Michael Tse (謝天華), and Francis Ng (吳鎮宇) is a classic in Hong Kong cinema. There are many memorable aspects to the movie, especially the love relationship between Ekin and Gigi. Her death in the third installment has gone down as one of the most heart wrenching scenes in Hong Kong movie history.

Gigi reminisced that during the Young and Dangerous era, she was still a singer but in the movie, her outfits were very daring and most of the time she wore very sexy miniskirts. “I used to worry about whether it would be accepted but with Ekin in the movie, it was guaranteed to be a success!”

They talked about their most memorable moments while filming and Gigi excitedly described a scene where they had to run along some houses and jump from the top of a tent. “The tent was at least a level and a half tall and I have a fear of heights! I asked the director whether I could use a stunt double, he then found a crew member to demonstrate the jump. I thought that person was my stunt double and was so relieved. Then the director suddenly yelled for us to be in place to start filming, and I realized that he still wanted Ekin and I to jump!”

Ekin’s most memorable scene was from the first installment where his character “Chan Ho Nam” was injured and Gigi Lai’s character helped pick away his scabs in bed. Gigi added, “We had to constantly touch up on the glue and makeup for the scab as we had numerous outtakes.” Ekin praised Gigi for giving a natural, convincing performance and felt that they were able to develop a strong chemistry. 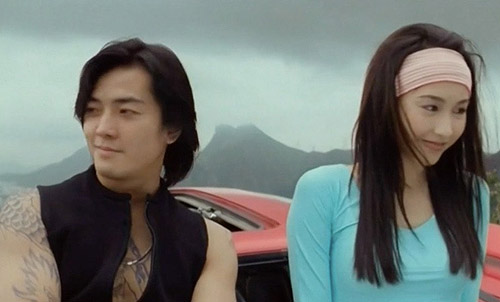