On February 5, Eliza Sam (岑麗香) made her first public appearance after announcing that she is expecting a second child, “Little Cashew,” two days ago. With Eliza’s baby bump stealing the show underneath her pink printed dress at La Perla’s promotional event, she revealed that she is already six months pregnant and nearing the end of her second trimester. Although Eliza’s pregnancy was unknown to the public until recently, she expressed that it wasn’t intentional – people just didn’t notice her baby bump underneath all her winter clothing layers. But now that the cat is out of the bag, many are curious about the baby’s gender.

However, Eliza is keeping her lips sealed! She said, “I don’t want to reveal it just yet. There are people in our family who don’t know yet, so we want to let them know before disclosing it to the public. The expected delivery date is in May.”

With a new baby on the way, Eliza’s firstborn, Jacob, is about to become a big brother. She is currently trying to explain the new role he will have in a few months, but unfortunately, he doesn’t understand yet, given his young age. The mom shared, “I bought some books to explain that he will be an older brother. I also told him that there is a baby inside my belly. He will kiss my belly and say, ‘Hi Baby Cashew.’ However, we don’t know if he understands; he just thinks it’s interesting that my belly is getting so big.”

During this time, Eliza has taken a break from work to focus on her health and family. She said that she still cooks at home and shares the responsibility with her husband and domestic helper. Eliza expressed that she feels happy whenever she gets to eat, and her appetite has increased significantly during this second pregnancy, with her often craving ham and egg sandwiches.

She said, “I wanted to eat pizza every day during my first pregnancy, but all I want is ham and egg sandwiches this time around. I feel incomplete when I don’t eat it. Maybe my food choices reflect my children’s personalities.” 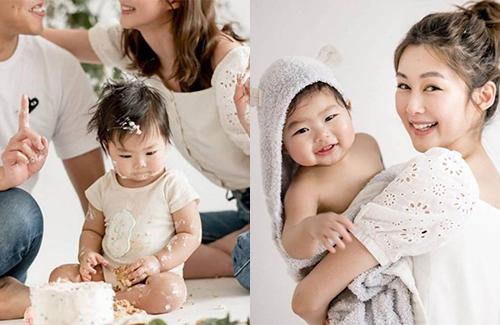