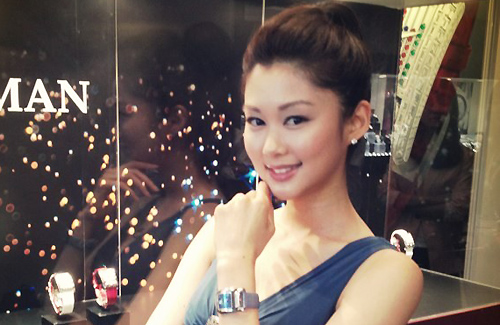 Riding on her popularity after Divas in Distress <巴不得媽媽>, “Goddess” Eliza Sam (岑麗香) will be heavily promoted next year by TVB. One leaked list of the 45th TVB Anniversary Awards winners revealed Eliza to win the Most Improved Actress.

Eliza is nominated in three categories — My Favorite Female Character Award, Best Supporting Actress, and Most Improved Actress. If the rumors are true that she will not go home empty-handed, Eliza better has an acceptance speech ready.

No Pressure to Win

When mentioned that out of her three nominations, she will at least end up with one award, Eliza revealed that she is only somewhat confident, as she already has winners in mind for all three categories. Eliza picked Mandy Wong (黃智雯) to win Most Improved Actress, Elena Kong (江美儀) for Best Supporting Actress, and she has more than one choice for My Favorite Female Character.

“I don’t feel any pressure to win at all. I didn’t even think I was going to be nominated for anything, so any award will just be a bonus to me,” Eliza said.

It was reported that many producers wish to cast Eliza in their series. As one of TVB’s fastest rising stars, Eliza will appear in Triumph in the Skies 2 <衝上雲霄II>, Sniper Attack 2013 <神槍狙擊 2013>, and The Hippocratic Crush 2 <On Call 36小時 2>.

With TVB giving her many opportunities, Eliza vowed to do her best. In Divas in Distress, Eliza was simply playing herself. She indicated her desire to try different roles and realizes that there will be many great challenges ahead. Due to her limited skills in reading Chinese, Eliza will consider hiring a tutor and even a translator to help her with the scripts.

Will Look Pretty at Anniversary Awards
Last week, Eliza went shopping for an evening gown to attend the ceremony. She chose a white dress designed by Dorian Ho, which featured a revealing deep-V in front. However, it will be altered to be less revealing, as Eliza believes it is too sexy for her.
With or without an award, Eliza’s popularity will be unstoppable. With her healthy and good girl image, Eliza is already a hot favorite among advertisers. Eliza reportedly has close to half a dozen of commercials with major brands under negotiation.