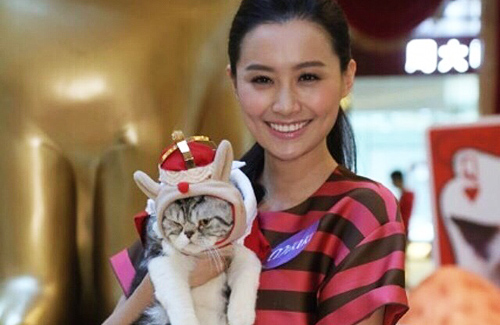 Fala Chen (陳法拉) made a rare public appearance in Hong Kong yesterday to attend a Christmas event for Mikiki and Grumpy Cat. Fala did not bring her own cat to the event, sharing that her cat has been suffering skin allergies and is staying in the United States under the care of her parents.

The former TVB star said she wants to further her studies in acting and has recently signed up for a short acting course in New York. Reports say that Fala has permanently moved to United States because she wanted to avoid her ex-lover Daniel Sit (薛世恒), but Fala denied the claims, stating that they still good friends and remain in contact.

Mentioning that Daniel and Bernice Liu (廖碧兒) are rumored to be dating, Fala immediately said, “I didn’t read those reports. [Daniel and I] don’t meet but we do send each other text messages because we are still friends. I don’t know about his rumors with Bernice Liu!”

Though currently staying in the United States, Fala said does not mind flying back to Hong Kongfor work. She recently completed the filming of Ronald Cheng’s (鄭中基) pirate movie Mysterious Treasure <神秘寶藏> and plans to continue her acting career in mainland China and Hong Kong.

Asked if she is interested in filming television dramas again, Fala admitted that TVB has approached her about a new collaboration, but she turned it down due to scheduling conflicts. After completing her 8-year contract with TVB last year, Fala is no longer interested in signing another long contract with the station, but she is open to opportunities to work together on a short term basis.