Asian Face of the Ensemble Cast

The HBO limited series, loosely based on the 1996 film of the same name (Irma Vep <女飛賊再現江湖>) which starred Assayas’ ex-wife Maggie Cheung (張曼玉), premiers as part of the festival’s selection.

The sole Asian representative of the cast, Fala turned up all-smiles in a pink suit paired with sleek white trousers. Irma Vep is her third foray into the international stage following US mystery thriller series The Undoing <無所作為> and Marvel superhero film Shang-Chi and the Legend of the Ten Rings. Joined by lead actress Alicia Vikander alongside others, she portrays Cynthia Keng, a rising Hong Kong star hired to be the titular character’s accomplice.

Sharing photos of the event on social media, the 40-year-old revealed that it was the first time she attended the Cannes Film Festival, and thanked the organizers for the invitation. Fans of the actress generally responded warmly and while some praised her hairdo, others were less enthusiastic. Fala also walked the red carpet in a blue gown at the ‘Chopard Loves Cinema’ gala dinner, a VIP-heavy event graced by the likes of celebrities including Korean actor Lee Jung-jae and supermodel Adriana Lima. 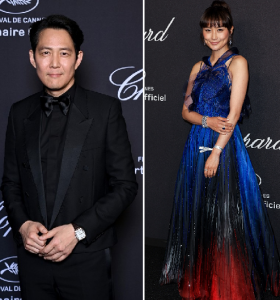