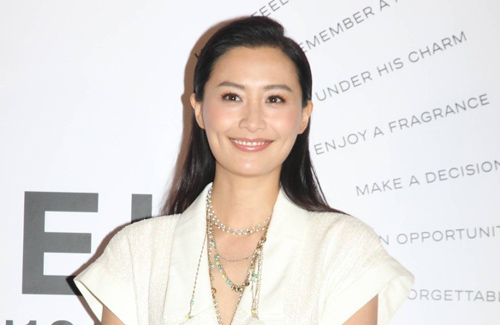 Fala Chen (陳法拉) made her first public appearance since marrying French entrepreneur Emmanuel Straschnov in May. Currently back in Hong Kong for work, the 37-year-old actress shared that she has been splitting her time between Hong Kong and New York since getting married. Her husband, however, permanently resides in New York.

Next month, Fala will be returning again to Hong Kong to take part in a new film as a guest star. Since it is only a small role, she will only be back for a short period of time. When asked whether Emmanuel would accompany her back, Fala expressed, “He said he really likes Asia, and he knows how to speak Mandarin. He has asked me before about whether I will have jobs in Asia, because he wants to come and live here for a short period of time.”

Reminiscing her wedding in Paris, Fala recalled a sweet and surprising moment, “When we were having dinner at the reception, he said he wanted to make a speech. I initially thought he was going to address our guests, but he actually began speaking in Mandarin to my parents. He said he would take care of me and treat me well. I didn’t think he would do that in front of an audience, so I was very touched.”

On whether she has gotten accustomed to married life yet, Fala said, “I’m pretty used to it, because we dated for three or four years before getting married. We are used to living together, so there isn’t really that big of a change. Sometimes, I am not used to calling him my husband and still refer to him as my boyfriend!”

Fala’s parents are also very happy with their new son-in-law and thoroughly enjoyed the wedding. Fala shared, “It was the first time I saw my dad dance. My mom is a dancing instructor, so she was twisting in all directions, shaking her hips, and was even on the floor at one point.”

Her first marriage to Daniel Sit (薛世恒) did not result in any children. On whether her parents are eager to become grandparents, Fala said, “We want to enjoy married life with just the two of us first. We are planning our honeymoon right now, which will likely happen around December. We want to go to either Antarctica or South America! When we have kids in the future, we will not be able to go because we cannot take them there.”