(Above): Set in a fictionalized dynasty, the epic centres on lead Mei Changsu, an intelligent strategist who must overturn a miscarriage of justice in his quest.

Slated for a 2024 release, fans are clamoring for actor Hu Ge (胡歌) to rejoin the cast of the third instalment of historical epic Nirvana in Fire <琅琊榜>!

Capturing a global audience, Nirvana in Fire, which aired in 2015 became a cultural phenomenon and masterpiece of its genre. While streaming giant iQiyi has teased a poster release, no casting details have been confirmed — though talk that actor Hu Ge will be reprising his role as Mei Changsu is dialing up anticipation!

The production team for the third instalment will be the original novel’s author Hai Yan (海晏), along with director Kong Sheng (孔笙) and Sun Molong (孫墨龍) of season 1, with its plot closely connected.

Upcoming Dramas to Watch
Also in the pipeline is a lineup of C-dramas including upcoming instalments of the Sword and Fairy franchise, which launched the careers of its cast including Hu Ge, Crystal Liu (劉亦菲) Wallace Huo (霍建華), Yang Mi (楊冪), Cecilia Liu Shishi (劉詩詩) and Tiffany Tang (唐嫣). 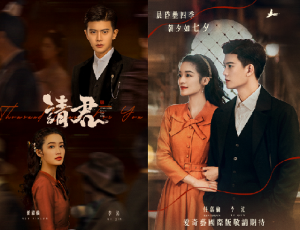 Not forgetting Thousand Years For You <請君>, a time travel romance between a god of war and a female bandit starring Allen Ren Jialun (任嘉倫) and Li Qin (李沁); and Bonds of This World <塵緣> starring Angelababy (杨颖) and Ma Tianyu (馬天宇) which follows the life of a woman born from a stone.

Touted as the drama adaptation of the movie Brotherhood of Blades (繡春刀), Shadow of Mountain and River <山河之影> will focus on the Ming dynasty’s elite brocade-clad imperial police.

Watch out also for beautiful cinematography in big-budget production Thirteen Hongs in Canton <廣州十三行, which goes back to eighteenth century Qing dynasty and is directed by Cao Dun (曹盾) who was behind the successful The Longest Day in Chang’an <長安十二時辰>.

Watch behind-the-scenes special for “Thousand Years for You”: