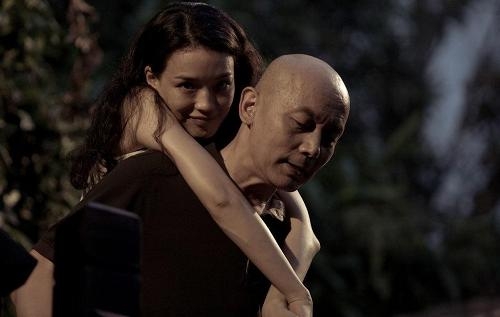 Director Feng Xiaogang’s new romantic comedy, If You Are the One 2 <非誠勿擾 2>, follows the love journey between wealthy entrepreneur, Qin Fen (Ge You) and beautiful flight attendant, Xiaoxiao (Shu Qi). In the film’s opening, Qin Fen proposes to Xiaoxiao at the Great Wall of China. Although Xiaoxiao accepts the ring, there are stilling lingering questions in the back of her mind as to whether she truly loves him.

In a lavish “divorce ceremony,” Xiaoxiao and Qin Fen’s good friends, Mango (Yao Chen) and Xiangshan (Sun Honglei) separate after five years of marriage. Mango’s divorce prompts Xiaoxiao to question whether her own marriage to Qin Fen will work. Sharing an isolated mountainside house, Qin Fen and Xiaoxiao agree on a “trial marriage” to test their love for each other. Acting like a couple who has been married for years, they display their worst habits and continuously agitate each other. Raising the stakes, Qin Fen pretends to be an invalid in a wheelchair and asks Xiaoxiao to attend to all his needs, refusing to even get up to go to the bathroom.

Qin Fen and Xiaoxiao’s trial marriage supplies the bulk of the humor in If You Are the One 2 before the film sets upon more serious contemplations about commitment, generosity, and tolerance in love.  Xiaoxiao is exasperated by Qin Fen’s stubbornness and childishness, yet his wisdom compels her at the same time. Foremost, Xiaoxiao is looking for love in a relationship. As a middle-aged man, Qin Fen is looking for a pragmatic marriage. Are the pair’s desires and needs intrinsically at odds with each other? Through a perhaps cliché turn of events in the last segment of the film, Qin Fen and Xiaoxiao are forced to confront a rush of raw emotions and their evolving feelings. Ge You is extremely effective in portraying Qin Fen and delivering lines filled with satirical wit. Tantalizing as the sexy Xiaoxiao, Shu Qi is seen in various states of undress in several scenes. The purpose of these scenes is likely to allow the audience to commiserate with Qin Fen’s lust and chase of Xiaoxiao, who while being within reach is yet seemingly always out of his grasp. Yao Chen is also well cast as Mango; the actress’ expressive lips articulate her character’s sarcasm and world-weariness.

If You Are the One 2 is an enjoyable film with fine performances from the cast. The film’s predecessor set box office records in China when it was released in 2008. If you are a fan of the first film, you will want to know how Qin Fen and Xiaoxiao’s fluid relationship evolves in this sequel.

For a full list of theaters, please visit:
www.chinalionentertainment.com/ifyouaretheone2