Despite the odds stacked against it, Final Destiny <一笑渡凡間> proved to be quite engaging. At first glance, it may appear to be a fantasy gag comedy, but it also offers suspense and character development. A bizarre mashup of different genres, Final Destiny is more of an experiment without placing viewership ratings as its top priority.

With limited budget and local resources, TVB has shied away from filming historical dramas in recent years. Final Destiny certainly does not impress with its paltry costumes and the same set which is used in 99 percent of TVB’s historical dramas. Viewers have seen all the settings and props, leading them to not have high expectations for locally-produced historical dramas. 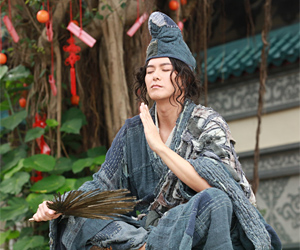 While not visually compelling, the interest is quickly shifted to what makes Final Destiny different. It is clear that the staff put effort into the details of the drama. In the second episode, Edwin is asked to compose a poem, which turns out to be a reference from Ji Gong’s Stories <濟公全傳>. However, despite being set in the Song Dynasty as the background, the drama is also full of modernities, especially in its gag humor and characterizations.

Whether it be a comedy, investigative, or fantasy drama, Final Destiny hooks viewers by creating suspense to continue watching. Suffering from amnesia at the start of the drama, Edwin’s character tries to piece together clues to find out his past. While trying to regain his memories, he gets involved in helping Roxanne’s character crack perplexing investigations, such as the “Case of the Burnt Corpse”.

Edwin delivers a playful performance as the eccentric Ji Gong, serving as the primary comic relief. While he becomes increasingly drawn to Roxanne’s character, they do not receive the typical romantic happy ending.

The supporting cast also deliver memorable performances, especially veteran actress Rebecca Chan (陳秀珠), whose contract has already ended with TVB, making Final Destiny her last drama with the station. Playing a married couple with To Yin Gor (杜燕歌), Rebecca’s loud and aggressive character is in stark contrast to her timid and passive husband as their sparks fly.

The final episodes reflect a deeper Buddhist perspective. Possessed by greed, Sammy Sum‘s (沈震軒) character has a final battle with Edwin in a CGI bonanza. His fate, along with other turbulent human emotions can be summed up with the Buddhist teaching, “Life is like a dream like a fog, and in the end it is a mirrored flower and water and moon. Everything is empty.”