Grace Chan Doesn’t Want to Be Typecast as Intelligent Beauty 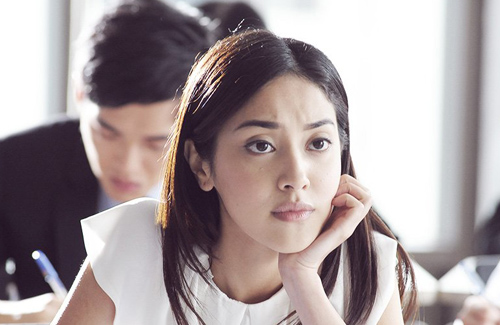 Having unfamiliar faces lead a series can be a risk, but if rookies were never given a chance, there would never be fresh faces in the entertainment industry. Grace Chan (陳凱琳), Jeannie Chan (陳瀅), Stephanie Ho (何雁詩), and Moon Lau‘s (劉佩玥) popularity were boosted after leading in Raising the Bar <四個女仔三個BAR>. To succeed in the competitive entertainment industry is not easy, but the four women are taking things slowly, one step at a time.

Among the women, Grace is arguably the most successful. The 23-year-old has been shooting one drama after another since winning the Miss Hong Kong crown in 2013. She was cast as the first female lead in TVB’s upcoming epic Captain of Destiny <張保仔>, and is also starring alongside Kevin Cheng (鄭嘉穎) and Kay Tse (謝安琪) in the fantasy drama Vampire <殭>.
When the three women of Raising the Bar were asked if they were jealous of Grace’s success, they unanimously said no. “We’re actually more worried about Grace’s health! She isn’t getting enough rest, and is not eating enough!”
Stephanie admires Grace’s hardworking attitude, explaining that Grace always arrives in the filming studios well-prepared. She is not jealous of Grace’s success, expressing that they are pursuing different images. “I’m going down the crazy route, while Grace is taking the sexy route. It’s hard to compare us.”
Grace said she does not want people to typecast her as the beautiful and intelligent Miss Hong Kong forever. “I want to use my efforts to become a serious actress who is always improving. I want to go down the hardworking route.” Grace added that although her Chinese is not as good as it should be, she really enjoys acting, and is willing to sacrifice her rest time to perfect her script-reading. “My parents helped me a lot in that.”
Moon pointed out that Grace is not only hardworking, but also very energetic. While everyone else is exhausted from the lack of sleep, Grace remains to be cheerful and talkative, adding a burst of energy. She also remarked that Grace is good at memorizing dialogue, “Grace is born to be in this industry.”
While Grace excels at memorizing dialogue, Jeannie said she is very poor at it. Portraying a barrister, Jeannie had trouble reciting professional dialogue, and often committed outtakes during court scenes. Stephanie clarified that Jeannie had many lines with professional jargon, so the outtakes were understandable.
Source: stheadline.com
This article is written by Addy for JayneStars.com.