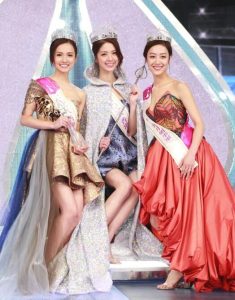 The finalists were selected from a joint decision made by the public and celebrity judges, while the winners were 100 percent chosen by votes coming from TVB’s “big big fun” app.

The 20 contestants showed off their best talents that night. #11 Samantha Li (李明芙) performed a Zumba number, while #15 Tania Chan (陳苑澄) did a ribbon dance. Hera did a brave yoga performance while hung in the air, and Amber awed audiences with her Chinese dance, earning the praises of celebrity judge and Miss Hong Kong veterans Tracy Chu (朱千雪) and Sisley Choi (蔡思貝). #13 Christy Tung (童銘欣) showed off her drawing skills with a witty drawing of the late Lydia Shum (沈殿霞), while Sara played the piano. #9 Yutori Kudo (工藤佑采) played the violin.

The pageant did receive a few complaints about the strange program arrangements when TVB required the eight fallen contestants to do a last dance number. Some of the girls looked visibly upset during the performance.

Finalist #14 Honey Ho (何泳芍), who was one of the most popular contestants during the earlier stages of the pageant, failed to enter top three. In a later interview, she said, “The three finalists all deserved it. We chose them too.” As for her thoughts on losing, she said, “I was a little nervous. I didn’t do that well during the Q&A stage and talent show.”

As for whether or not she would be interested in pursuing an entertainment career regardless, she said, “I am, but I will continue to work as a diving instructor.”