Him Law and Toby Leung Discuss Their Love Partners 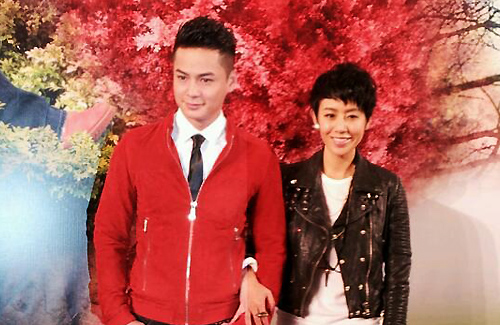 TVB drama, Season of Love <戀愛季節>, is currently airing during the opportune Valentine’s Day holiday. Him Law (羅仲謙) and Toby Leung (梁靖琪), who portray a bickering couple in one of the short stories in the series, were taken by the romantic air and spoke about the quirks in their real life relationships.

Him Reveals What He Looks for in a Partner

Last September, Him Law and Tavia Yeung’s (楊怡) relationship was publicly exposed when Him was spotted driving a drunk Tavia home. Since then, the couple has attempted to downplay their romance, but they are often teased about their relationship.

Him hinted that he may be most attracted to Tavia due to her maturity. “A couple’s time together not only involves sweetness, but also mutual understanding as there will no doubt be high and low points in a relationship.” Is Him fortunate to have Tavia to share his burdens? Him laughed and did not know what to say.

Aside from filming The Hippocratic Crush 2 <On Call 36小時 II>, Him will also venture into the mainland China market this year.

In Season of Love, Toby portrays Him’s chauffeur, while Him plays an famous actor in the series. Toby is known for her warm personality and does not shy away from having fun with her male costars despite her marital status. Since Toby and Him had already partnered in 2011’s Wax and Wane <團圓>, they often played pranks on each other and were not awkward in sharing an onscreen kiss together. Him even regarded the tomboyish Toby as a guy friend.

“I’m very compatible with Him. Aside from work, we can share our problems as friends. I told him there is no need to care too much about what others think, as long as he is happy. It’s impossible to convince the world,” Toby advised based on her own personal experience with negative rumors, which had involved Ron Ng (吳卓羲) and Bosco Wong (黃宗澤) last year.

Toby’s husband, Aaron Wong (黃敏豪), is supportive of her career and will even read the script together with her and appreciate her onscreen performances. Although Aaron is not a romantic man, Toby loved his honesty. “I will sometimes play along, pretending to be surprised and not know about his carefully constructed plans to make him happy.”

The couple has been married for one year and does not have plans to have children yet. Toby will film one or two dramas this year, while managing her apparel business. When the time is ready to start a family, Toby will be well prepared as she will benefit from being Angela Tong’s (湯盈盈) daughter’s godmother.