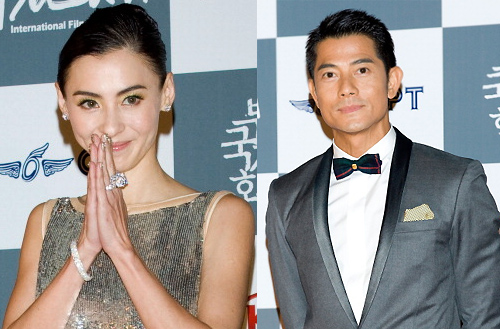 The 17th Annual Busan Film Festival’s opening night was a star-studded affair with over 3,000 in attendance in hopes to catch a glimpse of the glamorous celebrities. Tang Wei (湯唯) hosted the opening ceremony in a rather-plain looking one-shoulder dark purple gown along with Korea’s Movie King, Ahn Sung Ki. She boasted her language skills by delivering the opening lines in both Korean and Mandarin, followed by an interview with a few celebrities in English.

The fans all screamed in excitement as the top Korean celebrities walked down the red carpet, including Lee Byung Hun, Han Ga In, Kim Jaejoong.

Promoting Dangerous Liaisons <危險關係> at the Busan Film Festival, Cecilia Cheung (張柏芝) also did not disappoint when she made her entrance in a revealing low-back silver dress. Ever since Dangerous Liaisons started production, it was hit with rumors that Cecilia did not get along with fellow costar, Zhang Ziyi (章子怡). Ziyi did not attend the film festival, fueling further speculation that the rumors were indeed true.

Not to be outdone by the ladies, Aaron Kwok (郭富城) and Tony Leung (梁家輝) were also in attendance to promote the Hong Kong crime thriller, Cold War <寒戰>. The charming-as-always Aaron walked down the red carpet looking extremely handsome in a fitted suit and shook hands with screaming fans.