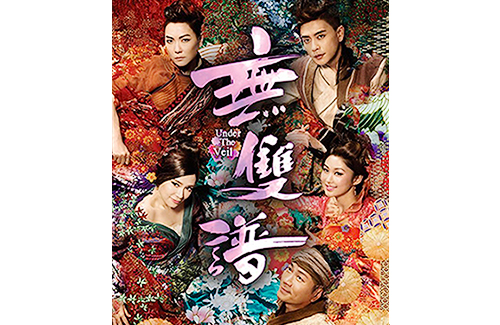 TVB’s second major television drama for the TVB’s 48th anniversary is the fantasy drama Under the Veil <無雙譜>, a remake of the popular 1981 television drama Double Fantasies <無雙譜>. Broadcasting alongside Captain of Destiny, Under the Veil is a series packed with improved CGI effects to complement its romantic fantasy theme. The drama started production in early 2014, and spent over half a year in post-production.

Under the Veil tells three separate folk legends of how people who look the same can also be very different in the inside—whether it is in the heart or the mind. It stars Wayne Lai (黎耀祥), Sonija Kwok (郭羨妮), Kristal Tin (田蕊妮), Raymond Wong (黃浩然), Bosco Wong (黃宗澤), and Eliza Sam (岑麗香) as characters who experience all of life’s worst tragedies—selfishness, greediness, vanity, and lust.

In the first story titled “Changing Pins”, Kristal Tin portrays twin siblings who fall in love with different men that share the same face, portrayed by Raymond Wong. The older twin, a general, has a male romance with a prince of the Liao kingdom, and the younger twin, a girl, gets involved in a relationship with a poor scholar.

In the second story “Judge Lu”, Wayne Lai is a poor scholar in an extramarital relationship with a prostitute who resembles his wife, portrayed by Sonija Kwok.

The final tale “Chasing Fish” is also about a scholar, portrayed by Bosco Wong, who is the target of affections for a fish spirit and a human, both portrayed by Eliza Sam.

Under the Veil will be premiering on September 28.

12 comments to Introducing TVB Anniversary Drama, “Under the Veil”