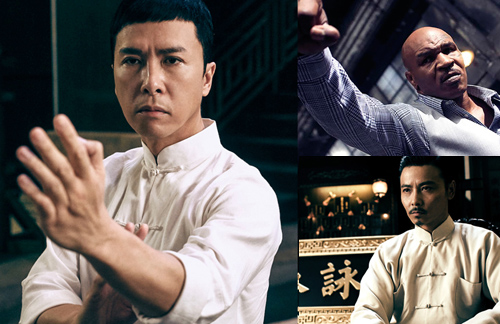 Following the wildly successful Ip Man <葉問> franchise, plans were made for a third film. It was recently announced that the highly anticipated Ip Man III <葉問3> will be released during Christmas this year.

Playing Ip Man for the third time, Donnie was able to easily get into character. He said, “As an actor, I am very grateful for the chance to play such a classic character with a deeply entrenched fanbase. I don’t know if I will get another martial arts character that will allow me to satisfy the fans to such an extent. I will, of course, try my best in the future when I play other martial arts characters.” Donnie added that he enjoyed working with Max Zhang, and there was a lot of chemistry between the two of them.

Max revealed that he will battle Donnie in a climatic scene, which showcases Wing Chun and a variety of other martial arts styles. Praising Donnie for being professional and having no airs, Max recounted, “When I met Donnie for the first time, he was the one who took the initiative to introduce himself. When filming, he would often have casual chats with me. He has also given me a lot of very helpful martial arts-oriented suggestions over the course of the filming.”

Ip Man’s elder son, Ip Chun (葉準), a martial arts instructor who specializes in Wing Chun, recently celebrated his 91st birthday. Max and the production team made a special trip to visit Ip Chun and send their birthday wishes. Donnie was unfortunately busy filming in England, but presented his birthday greeting in a short video clip. Ip Chun happily said, “The people from Ip Man 3 are all very thoughtful, and I’m looking forward to Donnie reprising the role. Here’s wishing the film success!”