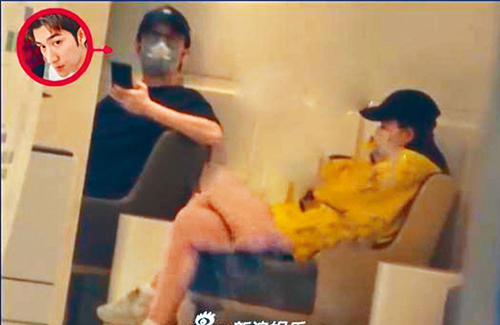 Chinese media has reported that they spotted Aarif Lee (李治廷) and his non-celebrity girlfriend at a maternity hospital in August. The hospital, located in Beijing, is said to be a very popular and renowned hospital that specializes in care for women during pregnancy and childbirth. Many Chinese celebrities, including Sun Li (孫儷) and Gao Yuanyuan (高圓圓), either gave birth or had check ups at that hospital.

Attached to the media report was a blurry photo of Aarif and his girlfriend waiting in the waiting room. It is speculated that the couple are their waiting for their gynecology and obstetrics check-up. Aarif’s girlfriend was wearing a black cap, a loose-fitting yellow sweater, and shorts.

After their check-up, the couple left the hospital to have lunch. In the photos taken, Aarif’s girlfriend removed her sweater revealing a tight tank top. Her belly was slightly protruded, leading to speculations that his girlfriend is at least several months pregnant.

Aarif have not responded to these reports and speculations.