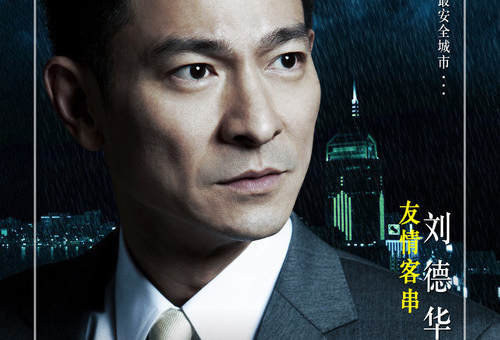 One of the most recognizable faces in Hong Kong cinema, Andy Lau (劉德華), makes a special guest appearance in the new and highly anticipated police thriller, Cold War <寒戰>.

In this film, Andy portrays the Secretary of Security for the Hong Kong Security Bureau. Andy indicated that he was very attracted to the story, and he wanted to be the lead actor. However, due to time constraints caused by the birth of his daughter, he simply had no time to play the leading role. Andy decided to step down from the leading role and guest star in the film instead.

September 27 will be Andy’s 51st birthday, but his fans already celebrated with him ten days ago. Many photos of the birthday party were uploaded to his website. Andy jokingly said he was busy shooting a movie in Macau, and spent even more time going over the photos again and again.

Andy’s parents also attended the birthday party, but his wife, Carol Chu (朱麗倩), and daughter were not present, adding a shroud of secrecy and privacy of his personal life.

“I Will Never Give Up on Hong Kong Movies”

Cold War stars Aaron Kwok (郭富城), Tony Leung (梁家輝), and Aarif Lee (李治廷). Compelled by the story, Andy wanted to be greatly involved in the making of the film. Andy had only praises for the executive producer of the movie, William Kong (江志強). Andy said, “William has spent so much time and energy on Hong Kong movies, and his life experiences are similar to my own. He’s one of my idols, and I am very glad to be in this movie.”

Expressing utmost respect and admiration for the production team, Andy said, “The executive, producer, director, and actors are all very passionate about Hong Kong style movies, and want to keep the flame burning. I want to be a big part of it;I will never give up on Hong Kong movies!”