Jade Leung Is Afraid Of Marriage, But Not Stunts 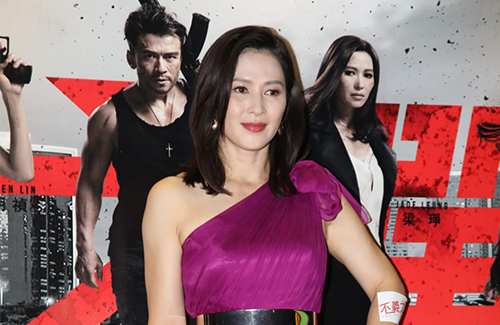 Jade Leung (梁琤) already established herself as an action star with her debut film Black Cat <黑貓>. The former Miss Asia contestant was a familiar face in nineties Hong Kong action cinema, and despite nearing 50, Jade still wants to continue to dedicate her life to perform action, until she could no longer do so anymore.

The 49-year-old has been shooting the new film Special Female Force 2: The Fatal Raid <不義之戰> with Jeana Ho (何珮瑜) and Lin Min-chen (林明禎). The girls received two months of rigorous training to prepare for the film. As the senior artist, Jade was in charge of leading the girls and guiding them through the filming process.

“It’s not easy to be a stuntwoman,” she said. “But I get so much energy every time I step into the film set. I never get tired of action scenes. I always want to do more of them.”

After 28 years in film, Jade still has no regrets about becoming a typecasted action star. “I don’t find this image very suffocating. There’s actually many different kinds of roles you can do as an action star. From doing Special Female Force to Chinatown <唐人街>, I get to try many different kinds of stunt work. I will gladly stay in this pigeonhole.” 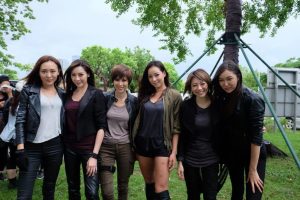 To stay in shape, Jade consistently exercises every day and has a regular training schedule. She enjoys stability exercises such as tai chi and yoga. “I’m actually a lot more fit today than I was years ago. Part of it came from experience, the other part came from the benefits of being part of a generation where you are surrounded by creative content. A lot of my skills came from watching tutorials online. I would try to exercise at least 2 hours a day.”

Interestingly, the show that got Jade more attention for her acting skills was the 2004 TVB drama War and Beauty <金枝慾孽>. Jade played Noble Lady Fuk, the unfavored concubine of the Jiaqing Emperor. It was a different kind of breakthrough for Jade.

“I accepted that role not because I wanted to remove myself from the typecast,” she said. “I’m sure every actor out there would love to try take on different roles. That was my attempt for that.”

The Thought of Marriage Terrifies Her

The 49-year-old will gladly dedicate her entire life to doing action films, but when it comes to her own future marriage and family, Jade said she has reservations.

“Maybe it’s because I’m a homebody, but besides work, I rather stay at home, hang out with my family, friends, or do exercise. I do want a partner to spend my life with, but I’m not the kind of person who would purposefully look for one. I’m rather passive when it comes to romance. I rather take things naturally.”

Like many young girls, Jade used to imagine being married with children. She would daydream about the kinds of relationships that she would want, but as she got older, she realized that dreams will stay dreams.

“Who doesn’t want a relationship to last till old age? But reality isn’t like that. I’ve never been hurt in a relationship, but I have yet to meet the person I want to spend the rest of my life with.”

It’s a huge responsibility to start a family. Jade said, “I used to think that I will definitely have kids after I get married, because that is what makes a perfect family. The older I get, the more I realized how much responsibility it is to raise a child. It’s a responsibility of a lifetime. Even till your death, you are worrying about your kids. That’s why, when it comes to marriage, I have a bit of fear.”

Jade is very close with her mother, saying that she is her biggest supporter and critic. “She won’t waste her breath. When she thinks I did bad in a scene, she’ll honestly point it out to me. That’s why I enjoy having my mother watch my projects, because it helps me improve.”

Jade continued, “She is the person I care about the most. No matter what happens to me, she is always be there to support me.”

2 comments to Jade Leung Is Afraid Of Marriage, But Not Stunts