For an entire month, Jeannie Chan (陳瀅) stayed atop Google search rankings after a three-second performance of her character seducing Owen Cheung (張振朗) in 2017’s The No No Girl <全職沒女>. And now, three years, later, Jeannie is back with another explosive performance.

Starring as Edwin Siu’s (蕭正楠) wife in the TVB drama Beauty and the Boss <愛美麗狂想曲>, Jeannie was getting bothered by Edwin’s lack of physical intimacy with her. One night, the normally tomboy Jeannie decides to dress herself in her sexiest lingerie to seduce Edwin to have sex with her.

Edwin, however, continues to ignore her advances. Jeannie quickly learns that Edwin only wants to have sex with her until she starts ovulating. But Jeannie isn’t interested in having kids, and Edwin is too afraid to have a conversation with her about it. Obviously, this story is to be continued. 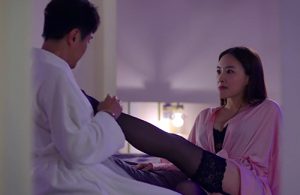