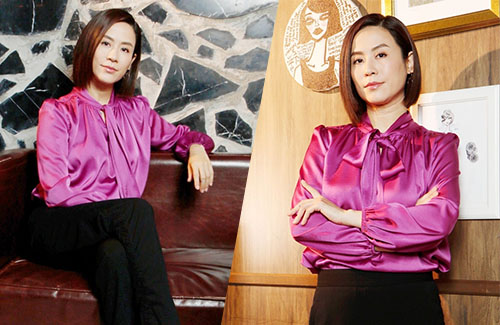 It’s been a whirlwind year for Jessica Hsuan (宣萱), who is now on the hot chair for Best Actress, thanks to her successful performance in the TVB drama My Unfair Lady <不懂撒嬌的女人>. Last November, the 47-year-old actress won TV Queen at the 2017 TVB Star Awards Malaysia, and all eyes are now on her to see if she would also be winning TV Queen at Hong Kong’s TVB Anniversary Awards ceremony next week.

With more popularity comes more public interest on her private life, yet Jessica is still proudly single. “I know quite a lot of people who are in unhappy marriages, and I’ve heard these stories many times before. If I got married earlier, the same would probably happen to me. I don’t think marriage is something that is necessary. I know very well what I want.”

Jessica shared that she did go out on a date with a man who has been pursuing her, but it was nothing conclusive. “If we’re not compatible, I rather be by myself. A lot of my friends say they’re envious of me to be able to go on vacation whenever I can. (How incompatible were you two?) Some people like to get drunk every night, but I don’t drink nor smoke. I just want a simple life.”

Happy with the current stage of her career, Jessica enjoys the privileges of choosing and rejecting scripts that are being offered to her. Nonetheless, Jessica still thinks she isn’t doing enough.

“I’m not exactly that successful, and there are still so many other people out there who have more money. But what’s most important is that I have earned every single penny I own, and I’m also doing what I like to do.”

When it comes to being a popular candidate to win Hong Kong’s TV Queen, Jessica said she’s facing it with a calm mindset. “I don’t think I have the highest chance. Maybe the results would be a surprise. If I did win, I’ll definitely be surprised, but the viewers might not think so!”

Speaking of surprises, Jessica said she longs for the opportunity to give viewers the chance to see a different side of her. “I actually really want to do a villain role. I played a villain role once in a mainland drama, and I got to ruin people’s lives everyday. I had so much fun in those few months, because I go to do something I haven’t done before. But what I would really want is to play [a villain role] in Hong Kong [dramas] that can be aired on TVB. Maybe a role like Nick Cheung’s (張家輝) in Secret of the Heart <天地豪情>. A character with big changes and development.”

Joking that Jessica has already lost interest in playing roles that get abducted, Jessica laughed and said, “How about I abduct people? I already played the victim 26 times! (Would you like to break your own record?) Those opportunities are always around!”