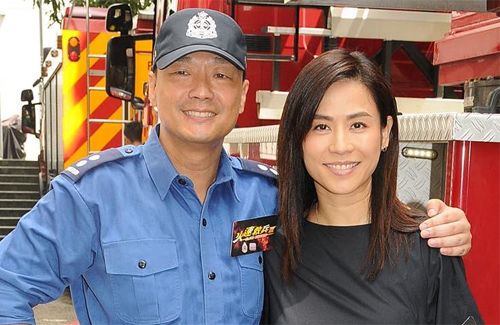 It has been 13 years since Jessica Hsuan (宣萱) worked with Wong He (王喜) in 2002’s Burning Flame 2 <烈火雄心II>. The former TVB artistes are reunited in RTHK mini series, Elite Brigade 3 <火速救兵III>.

Similar to Burning Flame 2, Wong He plays a brave firefighter again. The pair filmed a scene earlier in which Wong He rescued Jessica’s character from a burning building.

Although admitting to have gained weight in recent years due to the good food in Mainland China, Jessica apparently invested more time in working out. Jessica’s fit physique and youthful looks in Elite Brigade 3 earned positive feedback.  Jessica expressed, “I work out four days a week. When I have free time, I go to the beauty salon. I’m also careful about my diet – I can’t eat uncontrollably and never eat until I’m full. A couple of times when I was out with friends, I ate uncontrollably and gained a few pounds. Since then, I’ve been restricting myself so I don’t let loose again, because you can’t stop once you’ve started.”

Although Jessica silently agreed that maintaining her diet takes a lot of work and effort, she believes that keeping a good figure is part of an artiste’s job description. In addition, Jessica stressed the importance of being active even after marriage.

Besides Jessica, many former TVB artistes are widely known for their ageless beauty. Although both 47 years old, Vivian Chow (周慧敏) and Amy Kwok (郭藹明) maintained their youthful looks over the years. Chilam Cheung‘s (張智霖) baby face makes it hard to believe that the actor turned 44 recently.

5 comments to Jessica Hsuan, Wong He Reunite in “Elite Brigade 3”