28-year-old actress Karena Ng (吳千語) has been on a roll. Besides soaring popularity in China, her high-profile romance with wealthy 3G boyfriend Brian Shi (施伯雄), who has a reported net worth over $10 billion, also received well-wishes from the public. 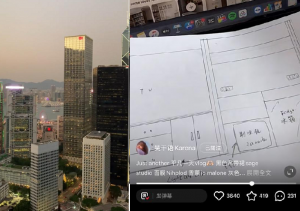 Back in Hong Kong after filming, she has also moved from her $50 million HKD Kau To Shan house to a bungalow in the central Mid-Levels, surrounded by magnificent views of the Hong Kong skyline. Active on social media, Karena often shares stunning views of Victoria Harbour from her home, and even revealed that she personally took part in the interior design sketches and renovation of her home.

Changes Spendthrift Ways?
Karena’s background has been a mystery since she entered the entertainment industry, though there were reports that she grew up in public housing, and that her dad used to be a roast pork seller at a market stall in Sha Kok area in Sha Tin. While she has yet to openly address the rumors, talk was rampant that Karena’s mom had trained her since young to merge into the upper echelons of society; she started joining her rich 2G friends at clubs and bars at 16 years so she would quickly blend into the higher classes.

Since dating Hong Kong actor Raymond Lam (林峰), she started to live the high life, openly posting about residing in mansions, buying flashy sports cars and splurging on branded goods. Since rumors of her on-off relationship with Brian Shi, Karena appeared to be reining in her spendthrift nature, dressing down when offscreen and even being spotted taking economy class when flying overseas on dates. The actress, who once said she hopes to marry and have kids before 30, declared lately that she would be giving up such thoughts and be content with “just being happy”.