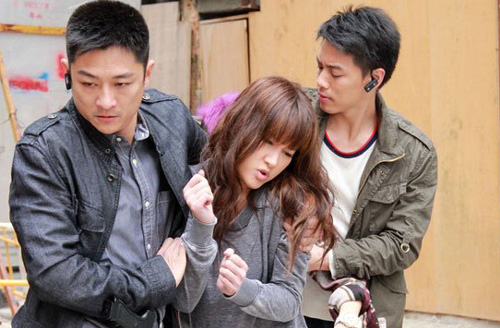 In new TVB drama, Fight Crime <雷霆掃毒>, Kate Tsui’s ( 徐子珊) character as a “Drug Queen” will be a significant departure from her former police roles.Yesterday, Kate filmed a scene in which she was caught by the police illegally selling bras on the streets with accomplice, MC Jin.

During the physical shuffle while arrested by the police, numerous bras spilled on the streets, resulting in a humorous spectacle. Known for her sexy figure, Kate revealed that she often purchased underwear from overseas due to the better fit.

Earlier, Kate had expressed joy in her breakthrough role as a drug trafficker in Fight Crime. The TVB star remarked that she had already portrayed a police officer five times in the past and thus was eager to change her image by portraying a character pushing the boundaries of the law. Kate’s character frequently got in trouble with the law and was often arrested by the police.

It was understood that an earlier scene of featuring Kate taking drugs via needle injections was filmed for the upcoming 2012 FILMART exhibition, in which TVB will be presenting clips of their upcoming dramas.

In additon, Raymond Lam ( 林峰), Michael Miu (苗僑偉), Jazz Lam (林子善) and Ben Wong (黃智賢) filmed a gun fire scene for Fight Crime yesterday. Due to his recent back pain resulting from sciatica, the demands of filming may have been too grueling for Raymond Lam. While firing from his gun, Raymond accidentally dropped the gun clip yesterday. Raymond felt embarrassed and explained that it has been an extremely long period of time since he had last filmed a gun fire scene. Jayne: The cast for Fight Crime looks impressive; hope the script does the series justice!