With the fourth wave of COVID-19 infections taking over Hong Kong, many have returned to their previous lifestyle of gathering restrictions and remote work from home to avoid further spread. With the past three waves, television ratings peaked due to the large number of people staying home. Forensic Heroes 4 <法证先锋IV>, which aired in February, broke rating records and became the highest-rated drama in seven years. In a move to capitalize on the increased number of potential viewers, TVB announced it will add Hong Kong Love Stories <香港愛情故事> to its fourth drama line-up starting on December 7. 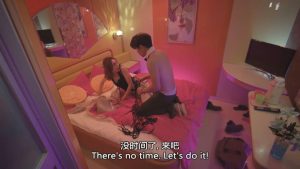 Starring Joey Law (羅天宇), Katy Kung (龔嘉欣), Venus Wong (王敏奕), and Mimi Kung (龔慈恩), Hong Kong Love Stories consist of 12 episodes and follow the lives of the Chan family and the love relationships of each family member, touching on the different values among the different generations.

The trailer features a steamy scene between Katy and Joey in a love motel. They are forced to find different temporary spaces for intimacy due to the high housing prices in Hong Kong. Many viewers will resonate with Katy’s character, who still lives with her family and is unable to have privacy with her boyfriend. Excited that Hong Kong Love Stories will air, Katy is eager for viewers to see a different side of her after her earlier assassin role in Death by Zero <殺手>.

Even though Hong Kong Love Stories was moved up from its original 2021 release, producer Lincoln Lam (林肯) indicated that the editing is already complete, and they are just waiting to send it to different streaming platforms.

Competing for local viewership is competitor ViuTV, which will be airing its popular talent competition King Maker III <全民造星III > during the 10:30 to 11:30 p.m. time slot. In the past, the ratings of King Maker tend to climb higher as it approaches its finale. Last year’s show received a high of 3.6 points–the ratings may climb even more this year as everyone is home during the pandemic.