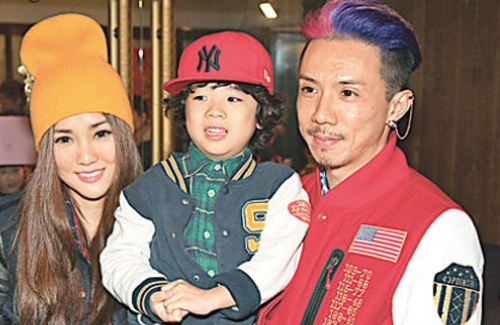 Sweeping four awards at the Metro Radio Hits Music Awards earlier, Kay Tse (謝安琪) appeared rather bloated on stage in her low-cut floral dress. It’s rumored that the 38-year-old singer is currently keeping her second pregnancy a secret until the end of the first trimester.

While Kay explained that her weight gain was due to side effects of her medications, the slow down in her work schedule continues to fuel pregnancy rumors. Besides the noticeable weight gain recently, Kay is allegedly preparing to take a ten-month long hiatus after her concert in April 2016.

Kay has been absent from a variety of social events and has only made an appearance during the Metro Awards show. Although Kay explained that her absences were due to her damaged vocal chords, many fans spotted Kay in long, loose dresses and thought she was simply hiding her pregnancy.

Currently focused on his acting career, Louis Cheung (張繼聰) refuted the rumors of having a second baby. Louis expressed, “I’ve been really busy lately – I have a series lined up in January and I have some advertising jobs. It’s not about the money but I want to improve my acting – I still think that I’m just not there yet.”

In regards to having a second child, Louis added, “Not yet! But I’ve been ready for a while – the baby’s gender doesn’t matter! Kay has a concert in April so if she is pregnant, I would be worried for her! To be honest, there’s no baby right now, but if she were to get pregnant in the future – I would notify everyone! Everyone in Hong Kong is giving me pressure right now.”