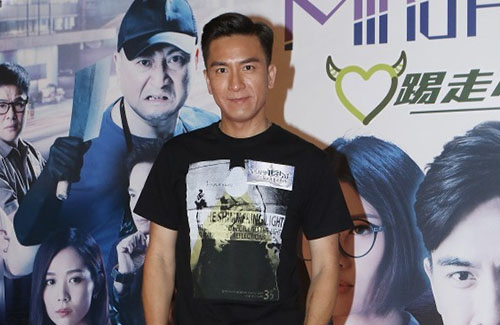 The following article contains some spoilers for Deep in the Realm of Conscience.

Since the drama’s premiere two weeks ago, viewership ratings hovered in the low 20’s range, indicating an average performance. Kenneth said he doesn’t consider ratings to be the most important, and is instead more interested in reviews and word-of-mouth. He commented that it isn’t a surprise that ratings are no longer as high as they used to be, as more and more viewers are using other methods to watch content.

A few days ago, Kenneth was spotted by paparazzi on a second date with his Deep in the Realm of Conscience <宮心計2·深宮計> costar Jacqueline Wong (黃心穎), who he is rumored to be dating. Asking if they are developing well as a couple, Kenneth said he hasn’t had the time to go out with Jacqueline more due to their busy schedules.

“We haven’t had the time to meet a third time, but I will let you know if anything develops. We were just watching a movie. I’d go on movie dates with my friends too.” (So how is your relationship with Jacqueline now?) “We are getting to know each other.” Nonetheless, the actor did not forget to comment on Jacqueline’s Deep bath scene with Annie Liu (劉心悠), which was published in the news a few days ago. “I wasn’t there when they shot the scene!” said Kenneth. “Of course they’re very pretty. All our actresses are beautiful women. Even the palace maids!”

Kenneth wasn’t at the scene, but he’s heard that Jacqueline and Annie had filmed the scene in comfortable conditions. “I know the bath water was warm. Filming in water at night can be very good, but the studio has provided warm water for them. Annie did say that the company is treating them very well.”

Asking if Kenneth had a similar scene on the show like Jacqueline and Annie, he said, “Actually, Edwin Siu (蕭正楠) and I also had a shower scene! But it wasn’t as beautiful as their’s.” Commenting that their scene sounded very “HeHe” (gay), Kenneth said, “I know! But you won’t get that feel when you watch it, because Edwin had some really handsome camera shots in that scene, and it’s about Annie noticing him and falling for him.”