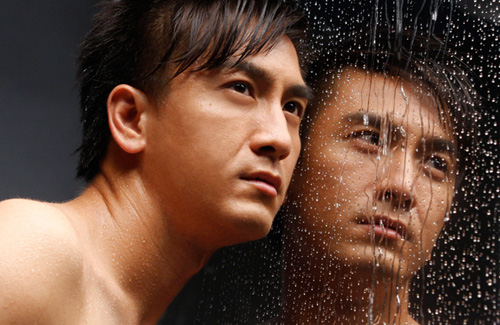 Often photographed going out with his mother, riding the train, and playing soccer during his time off, Kenneth Ma possessed a healthy image and was considered to be a rarity in the Hong Kong entertainment industry. According to Next Magazine, the TVB actor was tired of being pegged as an “innocent good boy.” Hoping to be regarded as a normal person with regular habits, Kenneth Ma proceeded to reveal his true self, that he possessed a lewd side and penchant for profanity!

Aside from Kenneth’s frugality, or rather practicality, in riding the train making news headlines, his romantic love life has also been put under the microscope recently.  Kenneth had dated Nancy Wu (胡定欣) earlier and remained protective of her after the break up. “It was not her fault; perhaps it was due to timing. She has a great personality and does not have a ‘princess attitude.’ She is very easygoing. Please don’t write anything bad about her; she’s a great girl!”

It was revealed earlier that Kenneth had liked Sharon Chan (陳敏之) while filming Dream of Colors <下一站彩虹>. At a February function, Selena Li (李詩韻) also declared publicly, “I know that Kenneth had a crush on me for the last 6 or 7 years!” However, it appeared that Sharon and Selena only saw Kenneth as a friend. Kenneth denied ever dating  both women.

Apparently, Kenneth was the most reluctant to discuss Margie Tsang (曾華倩). Considering Margie to be a great woman and friend, Kenneth had endless topics of conversation with her. Asked whether he had dated Margie, Kenneth smiled painfully, “I admire her. We are very compatible personality wise; she is the type of woman I like! We have gone out together for meals of course. However, I do not know why we were unable to advance further.” Kenneth professed that perhaps they knew each other too well and that it was better to keep her as a friend, as friendship can last forever as opposed to the common animosity between jilted lovers.

A Dirty Mouth And Lusty Interests

Kenneth believed that a fixed image worked against an actor, which may make his performance less convincing in the audience’s eyes. Thus, it was best for an actor to have no image at all. In the past, Kenneth was criticized by the media as possessing “zero star feel,” due to his casual attire. Kenneth noted that he never considered himself to be a star, only an actor. As long as his clothes were clean, he felt fine. His habit of taking the train to work was well chronicled by the paparazzi. Regarding this, Kenneth noted that his house was situated very close to the train station; thus it was a practical means to get to work at TVB City.

Often pegged as an innocent and naive man, Kenneth hoped to erase this image.  “I’m already thirty-something! How can you say I’m still innocent? Even if I said so, I would be lying to you!” Kenneth claimed that his sins remained private since they have not been photographed by the press.

Regarding his private sins, Kenneth revealed that he had a dirty mouth full of expletives, “When I am with friends, sometimes I will curse a lot! Due to the heavy stress from work, I will go play soccer and meet friends at a cafe. We will curse while joking. I feel very free and relaxed.” Kenneth will draw the limits if there were women present and refrain from speaking so rudely.

Kenneth laughed and added, “I’m a lusty man! When I see a beautiful girl, I will say, ‘Wow! She’s hot! Wow! Her waist is so young!'” Kenneth admitted to flirting with women and trying to pursue those he was interested in.

In an earlier interview, Kenneth Ma commented that he saw the Internet as useful for browsing current events topics, sports news, and pornography. His admission that he looked at pornographic sites aroused a strong reaction from online discussion forums. Perhaps due to his “diamond bachelor” image, netizens praised him for being”honest” and “a real man” instead.

Graduating from the University of British Columbia in Canada with a Mechanical Engineering degree, Kenneth professed that the most useful experience was joining the university’s drama club. Recalling this experience with fondness, Kenneth expressed that he wished to act in a theatrical production once again. He was also interested in filming Chinese dramas in mainland, as well as a movie.

Despite the recent mass exodus of TVB artists joining rival television stations for higher pay, Kenneth did not consider this, as there were still 3 to 4 years remaining in his TVB management contract. Between acting awards and money, the practical Kenneth Ma chose money. Kenneth stated bluntly, “When you are poor and have nowhere else to turn, you cannot eat your award; it is just a junk piece of metal! Money can support your lifestyle. I am very practical! Ha ha!”

Kenneth Ma’s bluntness was refreshing and indeed, he was a rarity in the Hong Kong entertainment industry.

Jayne: What is your reaction towards Kenneth’s admission that he has a lusty mind, enjoys surfing for online pornography, and has a dirty mouth? Is your former image of Kenneth destroyed or you are amused by his “private sins”?